Superstitions about the Monkey Puzzle tree can be found throughout Britain. One widely-shared bit of folklore is that the Devil himself sits in this tree and people have to be quiet when walking past or else they will attract the Devil’s attention and get bad luck. In some cases this was to be bad luck for three years. This is clearly a story that reached Heywood. Strangely enough, an old Cambridgeshire belief has Monkey Puzzle trees being planted on the edge of graveyards to PREVENT the Devil from climbing them and then watching burials.

This link between the Devil and the tree was recalled in more recent times by Dougal Douglas, the main character of the 1960 novel The Ballad of Peckham Rye. He was said to be associated with the Devil and had shape-shifting abilities, and in one scene he adopted the form of a Monkey Puzzle tree.

Tree superstitions have been widespread in Britain dating back to prehistory, so it is no surprise that the unusual Monkey Puzzle attracted such stories. It was actually thought to be imbued with special qualities long before it ever arrived in Britain, as it was sacred to some members of the Indigenous Mapuche tribes of the historic Araucania region of south-central Chile and south-western Argentina, where it originated. 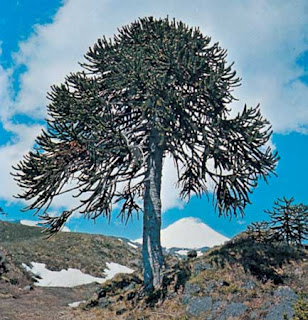 Of course the British superstitions may simply be a bit of 19th-century parental health and safety management, as the spikes on the trunk are very sharp and parents would have wanted their children to avoid the trees. It is easy to imagine mothers warning their children to stay away from the trees and using the Devil to scare them. This would be similar to the many localised tales of Jenny Greenteeth, the ghoulish creatures that were said to live in ponds and drag unsuspecting children underwater. In fact the dangerous qualities of the tree were recently highlighted when a Welsh local council wanted to cut down a 150-year-old specimen because of the danger the thorns presented to children.

One story that did the rounds among Heywoodites was that these were the first Monkey Puzzle trees in England! This sounds like a typical urban myth and there is no evidence to support it. Araucaria araucana were originally found on the flanks of the Andes in Chile and Argentina, and it is thought that specimens were brought to Britain by the plant collector Archibald Menzies in 1795. He kept some nuts that he was given as dessert during a banquet in Chile, then grew them on his voyage home before donating them to Kew Gardens. There is no logical reason why these prized specimens would have ended up on Heywood Hall Road. 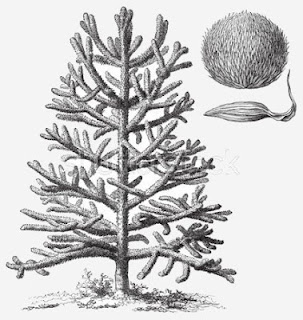 Why is it called the Monkey Puzzle tree?
Before the 1850s the tree had the popular name of ‘Joseph Banks pine’, named after the famous botanist. The current name is said to have started in the 1850s when the owner of a young specimen near Bodmin, Cornwall, showed the tree to some friends. One of them pointed out its spiky trunk and winding branches and remarked that "It would puzzle a monkey to climb that". The names “monkey-puzzler” and then “monkey-puzzle” took hold after this time. In France it was known as the “désespoir des singes”, or “monkeys' despair".

(It is thought that that the spiky leaves evolved not to deter monkeys, but rather the grazing dinosaurs of the Mesozoic era of 250 million years ago, which the Araucariaceae tree family can be traced back to.)


Araucaria araucana is now listed as an endangered species, but the trees on Heywood Hall Road have been cut down in recent years. This was probably for the best as Araucarias can grow to 30-40 metres tall and live for 1000 years, making them unsuitable for local streets. There are a few other Monkey Puzzle trees scattered around Monkey Town, but the old superstitions are probably passing into history. 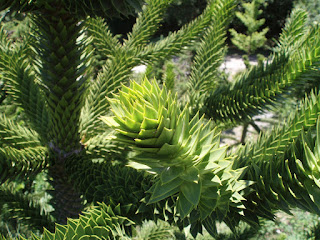 Do you know of any other Monkey Puzzle trees in Heywood, or any other stories and superstitions about them? Let us know in the comment section below. Photos are welcome too.

Lapinbizarre said…
Remember the trees well from my childhood and checked on Google Earth very recently to see if they were still there. They weren't.
Sun Sep 16, 06:31:00 PM

Sighs of relief.unscathed, onto Queen's park we'd trek
To the swings and the lake with the bread that we'd take, the geese more than willing to peck.

Homeward bound soon came round,
To the park we bade farewll, tired but still resolute,
The mighty trees they would tease, held our will to its knee's then we'd pass and yell "Hoot hoot hoot"

Anonymous said…
haha not likely!
I remember the council asked us to leave our house for the day as they had to fumigate the block for blackjacks (nice eh) and mum took us all down to the park with jsm butties and corporation pop and I raced on ahead and misjudged the tree because I was chattering with excitement, I lost the belt from my best dress on the park, I was mortified!

Years later I started dating a guy from down south and always hushed him when we passed the trees, He thought us Northern monkey's were bonkers with our superstitions yet he never spoke again when passing them LOL.
Mon Oct 08, 10:28:00 PM

Anonymous said…
I had been raised in Tring, Hertfordshire and I was told it was bad luck to say the name of the tree if you weren't looking at it. I still won't!
Mon Apr 29, 01:35:00 AM

Corraddo said…
I,could not believe my eyes when stepping aside politely to give way instantly as lost in thought as this long branch which had stopped me In my tracks or the overlarge female lumbering towards me on my blind side might have resulted in my own death caused by being taught too many manners at such a young age meaning I often tripped over my own feet as usual. As I was falling I managed to birl away from the arm of the monkey puzzle but hit it's tiny pot and as I slithered backwards now attempting to avoid both of them the four foot monkey toppled over in time to soften the arrogance fall
Sat Jan 26, 08:57:00 PM

Unknown said…
I live in Holland and it is believed that if you plant one in You garden and it dies then a member of you family will also die, consequently the Dutch people are reluctant to plant one
Sun Feb 10, 07:50:00 PM

Unknown said…
I have had one in my garden for 11 years now it is greatly admired however I’ve noticed hence the reason I’ve looked up Monkey puzzle trees that it is looking ‘yellow ‘ is this a danger to the tree ? I live in Eastlothian Scotland any idea can it be lacking water ?
Wed Apr 17, 10:42:00 AM

Andy. said…
Great, I have just purchased one and I was unaware of the superstition related to this tree.x
Thu Feb 06, 07:22:00 PM

Unknown said…
Millcroft tea room has a large collection of monkey puzzle trees, i belive on of the biggest outside of q gardens
Sat Nov 07, 11:06:00 PM

Unknown said…
My daughter recently purchased some property that has a 7 acre arboretum on it in the Pacific Northwest of America. The monkey puzzle tree here is about 40 feet high. Fascinating.
Tue Dec 08, 05:20:00 PM