John Lennon: 'We write about our past... We really got into the groove of imagining Penny Lane - the bank was there, and that was where the tram sheds were and people waiting and the inspector stood there, the fire engines were down there. It was just reliving childhood.'

Interviewer: 'You really had a place where you grew up!'
Lennon: 'Oh, yeah. Didn't you?'
Interviewer: 'Well, Manhattan isn't Liverpool.'
Lennon: 'Well, you could write about your local bus station.'
Interviewer: 'In Manhattan?'
Lennon: 'Sure, why not? Everywhere is somewhere.'
(John Lennon interview, Rolling Stone, 23 November 1968)

John Lennon was right when he said 'everywhere is somewhere', but the further away from Heywood you travel, the blanker the look you get when (after being asked) you tell people that you're from Heywood. To most other people the town is nowhere, but for thousands of Heywoodites the recent success of the 'Remembering Heywood' Facebook page has shown that every street, lane and patch of trees in the town is somewhere special for someone.

The rise of RH was spectacular (see this Heywood Advertiser article). Within a couple of weeks of being set up in April this year the page had over 6,500 members, and in a town with a population of around 29,000 that would have to include just about every Heywoodite aged over 30 with a Facebook account, including hundreds of former residents. For many of these ex-residents it has been a sort of homecoming.

Coincidentally, RH was set up just a few weeks after the newsletter of a professional historian's association published my short article on the subject of Facebook and how some groups on it were actually really good sources of new historical material. RH has proved my point in spades. While these online reunions of old friends can be an emotional and personal experience, it is the sharing of stories and reminiscences, the filling in of blanks and names in each others memories, and the sharing of old photographs that makes them such a brilliant wellspring of information. Instead of a few old friends having a quiet chat around a table about the old days, RH has provided a platform for a huge number of people to catch up all at the same time and the energy has been great. 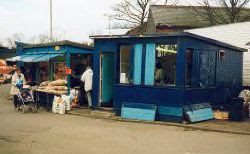 Much like Lennon and McCartney recalling the people and buildings along Penny Lane, RH has been full of discussion of exactly what and who was where. The result has been surprising, often showing the shortcomings of memory, and I was surprised by how much I had misremembered or forgotten. One example was the posting of the photograph to the right, showing the entrance to the old (long gone) markets off Hind Hill Street. I hadn't seen this scene in decades, and to tell the truth hadn't given these huts a second thought since I was last there, but this photo triggered some long-closed memory banks and suddenly I could clearly visualise the entry to the markets and walking through to the stalls inside, and even recall the smell of the place (like most indoor markets, not too great). Hundreds of comments and other photos from inside the market were posted, and as people named individual stalls and wrote about their own experiences there it was clear that RH was suddenly the most comprehensive resource in existence on the history of these old markets.

It was the same with the discussions on dozens of other subjects, including Heywood pubs, summer holidays, workplaces, Queen's Park, old primary schools, favourite chippys, cinemas, first crushes, demolished mills, and even the the legendary 'Fireman's Foot' at Crimble Mill. Some of the original photos on RH of Whit Walks, school classes, and locals in the streets are brilliant, and any librarian or historian worth their salt would recognise the historical value in them straight away. The follow-up comments on these photos have unearthed all kinds of invaluable 'who, when and where' details.

Not that RH hasn't had a couple of issues. Sometimes there has been a mad rush to post blurry new mobile phone photos of great original photos, when some quality control would have been welcome. Not everybody has access to a scanner, but taking a few minutes to get a decent shot is well worth the effort. Also, new photos being thrown up every minute (not all of them relevant) can disrupt good discussion on other posts, which tend to get knocked down the page and out of sight.

As RH regulars would know, there have also been some copyright problems with photos from local library collections being reproduced on the page. I wrote to the library staff involved and reminded them this was a great opportunity for some community engagement, and while they could release some photos to be used on RH and get some quality background information on them, there was also a lot of top-quality photos turning up on RH from personal collections that could one day become part of the library collection and preserved for the centuries ahead. They had meetings planned to discuss this, so fingers crossed they will show a bit of vision and community spirit and work productively with the RH people. If not, it's their loss. 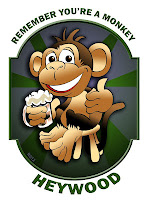 These are minor quibbles, however, and the overall effect of the page has been profound. While a large-scale reunion at the Civic Hall has been planned, many smaller reunions have been taking place, as people come into contact with old school friends, workmates, neighbours, and even some old flames too. A sense of Monkey Town community pride has returned, and a new badge has even been made (left) so people can recognise fellow RHers when they are out and about around Heywood. People are realising that their nostalgia is not misplaced, and that many others, even those now scattered around the world, have their own fond memories of Heywood as being a special place to live and grow up in.

The membership of RH peaked at 6,700 people, and the group will no doubt shrink a bit in the future, but even if it upped and died tomorrow it has already done its job. There was a time when you lost contact with people, and that was that; you would never ever see or hear of them again for the rest of your life. We are lucky enough to be around when something like RH is possible, and to be able to say hello and chat again to many of those 'lost' people we once knew. Not to mention making a whole bunch of new friends.

The huge emotional rush of the early weeks might have faded a bit for some now, which is to be expected, but there are still new people discovering the page and having those massive 'OMG!' moments when they recognise someone from their past. I'm sure that in years to come many of us will be looking back to when we first found the RH page in 2012 as being one of those memorable events in our lives. As we all know, everything constantly changes, and 'Remembering Heywood' as it is now won't be around forever, but in the meantime there will no doubt a lot more great photos, discussions, and reunions big and small to be enjoyed.

18 months after this original post, 'Remembering Heywood' is going as strong as ever and has even recorded a small increase in numbers. People continue to contribute new 'old' photos from family collections, and while the discussion has calmed down a little bit after the initial frenzy it remains as interesting as ever. The occasional blurry mobile phone photo is still posted there but generally most photos are quality scans.

The page is still going reasonably well. A handful of people still manage to come up with old photos of the town, but a lot of posts are about missing pets, crime, etc. Unfortunately some people are also using the page to run highly negative political campaigns.