Doffers and Donkeys: Heywood in the 1840s 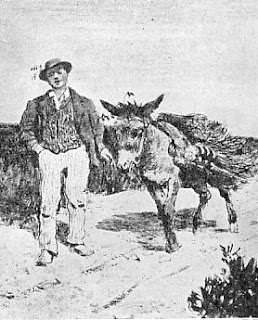 In May 1891 a letter from J Waddington of Torrington Street appeared in the Heywood Advertiser. He wrote of the Pilsworth Road/Bridge Street area in the early 1840s, when he was a young boy, and recalled a number of local characters and institutions around there, Bury Street, and Peel Lane, including 'Ruth o'th' Rags', 'Jim of Old England', Old James Hardman's School, and everyday life around the early mills. The result is a great little snapshot of life in Heywood from a time when everybody had to carry their water from wells, and one or two people kept donkeys in their cellars! (Bracketed numbers are for the explanatory notes below this article).


"In looking back what a change we see since Margaret Gee owned the old New York Factory and Mr. William Hartley was the tenant, when the old steam engine was hand gear, and gave a clicking sound in working; when Ben Taylor followed the occupation of dyeing at the Brook Side, long before he removed to Miller-street; when the cart road from Pilsworth was along the brook near New York, which was very cooling for the horses' feet in summer. This was before the brook was sewered and tunnelled.(1)

"There were then no waterworks in Heywood, and the domestic water was fetched from wells. A noted well on the roadside at New York went by the name of `Who-sho-well.' Here you might see many people waiting their turns for water with large cans, which they carried on their heads, and farmers would sometimes fill their milk cans on returning home after delivering their milk. Three noted characters living near the brook at that time were old Isaac Smith, Tom Livsey (blacksmith), and William Darny (butcher). At the opening of the Heywood canal there was some sort of demonstration, when old Isaac Smith accidentally fell into the, water and got a good sousing.

"Where the Primitive Methodist Chapel now stands was a row of low cottages, which were somewhat remarkable.(2) Old Jimmy Chadwick's rag shop was at the top, a well- known figure being Ruth o'th' Rag Shop, who wore a man's overcoat and worked for Old Jimmy. Near the middle of the row lived an old soldier, who went by the name of Jim of Old England, and near the bottom of the row lived old Jimmy Grindrod, who kept his donkey in the cellar.

"I can remember many of the old inhabitants of Bury-street, and have a clear recollection of old Jone o' Sakory taking me, along with two or three other lads, to the counting-house of Kershaw's mill, to apologise to Mr. Robert Kershaw because we had been getting bonfire stocks from the fences of their fields. Bill Horrox's smithy was a noted and busy place, his apprentice, Coggs, and his two lads, Bobby and Jim, helping him at the hooping of cart wheels and shoeing of horses. Sometimes we saw a tooth knocked out of a horse's head with a hammer and an iron bar in a very rough and ready way. William and Joseph Diggle of the stillborn factory (which was lately run by the Messrs. Lund), my father, Charles Walsh (picker maker), Samuel Gee (butcher), Squire Parker, Esther Ingham, Molly Whitworth, and Abraham Howarth, shopkeepers, were amongst the other residents.(3)

"At that time there were very few cheap trips, and I have heard it said that Mr. Wilham Diggle was once three weeks in going to the Isle of Man in a sailing ship, the delay being caused by a storm driving them towards the coast of France. In a letter I received from an old schoolfellow, Jacob Taylor, now of Nebraska, he lives a very graphic description of our old day school, which was situated in Peel Lane, and went by the name of Old James Hardman's School.

"The school was an old loom house, with diamond-shaped window panes set in leaden frames, a dirt floor, stone stairs, and double desk. My friend pictured the old schoolmaster dressed in a swallow-tailed coat, knee breeches and low shoes, sitting on a low table in the corner with a square box in which he stored his paper and copy books behind him, and his brown dog, Nell, sitting on the table by his side. Many a time when we were having a good ferruling the dog would help at the job by biting our heels, and thus increasing our crying. The school was so small and the scholars so many that they had to sit on the stone stairs, almost up into the chamber. My friend used to bring long hazel sticks from Grislehurst Wood, with which old James could reach across the school and lay across our backs. James Hardman was a remarkable man. He taught measurement and land surveying, and he would sometimes take one of the elder scholars with him to hold the land surveying chains. A curious custom was that the school children came outside, and we would sit in line on the kerbstones fronting Mr. Kershaw's residence learning our lessons. I can well remember losing a leaf out of my spelling book, letting it fly through the rails into Kershaw's garden, and being afraid to fetch it back. My friend, in his letter, speaks of playing truant for nearly a whole week, along with three or four other Hooley Bridge lads, and passing the time skating and "slurring" on Marland Mere, and of the terrible thrashing they got when their mothers took them back to school.(4)

"At that time the Kershaw's and Kay's mills were kept very busy, Mr. Robert Kershaw and old Mr. Richard Kay being very prominent local figures.(5) In passing I will mention an incident which occurred in Peel Lane, near the old original mill, about fifty years ago. A lorry or pack cart was standing, waiting to be leaded, near the yard wall with the chainhorses unhooked, during the dinner hour, when some mischievous doffers hooked the chain horses to the rails of the Yard wall and ran off to their work. The consequence was that after dinner, when the horses were started, a large portion of the wall and railing was pulled down, and there was then a fine shine between Mr. Kershaw and the throstle doffers.(6)

"I may be mistaken, but I think that elderly people were then more primitive and homely in their manners than they are now. In Peel Lane and Bottom o'th' Brow lived old John Baron, old Tummy Openshaw, old Betty Dawson, and Tummy Chambers.(7)

"I can remember the old row of tall cottages with garrets, and the old mill at Back o'th' Moss, with its water wheel, and have some faint recollection of seeing the old steam engine with the engine beam of strong wood, strengthened by iron plates and bolts and, if I mistake not, Watts's sun and planet motion was applied to the crank and connecting rod; but perhaps someone else will recollect the old engine better than I do. The mill was owned by the Peels; and the managers were Anthony and James Holmes."(8)


(1) This was Wrigley Brook, Heywood's 'secret stream', which runs from the Hareshill Road area down to join the River Roch at Bottom o'th' Brow. The brook has been culverted since the 19th century, and follows the course of Pilsworth Road from near Egerton Street before passing under Bridge Street, hence the name of that street.
(2) This large chapel was across from the junction of Peel Street and Bridge Street.
(3) Preliminary research has failed to explain just what a 'stillborn mill' is, with the best guess being that it has something to do with processing stillborn livestock. Any suggestions or explanations are welcome.
(4) Marland Mere was a broad stretch of water near what is now Springfield Park.
(5) Kershaw Street and Kay Brow both run off Pilsworth Road, a reminder of these millowners and their local mills.
(6) A throstle was a cotton or wool spinning machine, and 'doffers' were mill workers aged from ten to fifteen, whose job it was to take full bobbins off the spindles, and put them onto empty ones.
(7) 'Tummy' and 'Tummus' were often used for Tommy and Thomas.
(8) An article all about this mill can be found here.