'It's a pot full o' brass!': The Roman Coins of Hooley Wood 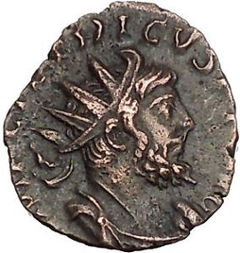 Heywood made the news back in 1856 when it was reported in the Manchester Guardian that 'considerable excitement prevails in this pleasant little village' because workmen near Hooley Wood* (now known as Plumpton Wood) had unearthed what was described as ‘the largest find of Roman coins ever made in Lancashire’. It was hardly a treasure trove as all the coins were of low monetary value, but the 700 coins found there let us know that the Roman occupation of Britain (AD 43- AD 410) did touch Heywood in some way.

Anyone who has ever studied archaeology at university will know that painstaking care is needed to make sure you don't damage what you are excavating. For those not familiar with the Archaeological Method, the following is an account of what NOT to do if you ever stumble across a big vase full of ancient coins in the local woods.

One Tuesday morning in February 1856, local labourers John Leach and James Clegg were turning up ground during the construction of Plumpton Hall for the son of John Fenton (owner of Hooley Bridge Mill). They were working at a spot described as being 'near to a footpath which runs between Plumpton House and the River Roche, and almost opposite the house, being a few yards nearer Rochdale'.

Several 'queer old-fashioned pieces of iron' had already been found and discarded during excavations for the foundation, so when Leach and Clegg came across an upright clay jar embedded in a low mound of soil, the other workmen were quite uninterested in the find until one of them knelt down for a closer examination and shouted out 'Why, it's a pot full o’ brass!' (meaning money). This sparked a little gold rush among the men, who quickly grabbed the jar and tried to shake the coins out over a wheelbarrow, but the dampness of the soil over several centuries had caused the coins to corrode together into a mass 'the size of a football', so the workers smashed the jar open with their spades. When the cemented ball of coins rolled out the men again used the spades to break it apart into smaller lumps before quickly filling their pockets. The coins were about 2cm in diameter, and all made of copper, and some were so corroded and paper-thin that they crumbled when touched.

Several hundred coins disappeared in this way before news of the find reached John Fenton, who was the legal owner, being the owner of the soil and lord of the manor. Roman coins had also been found during construction of Fenton’s Crimble Hall, so he was already aware of the historical worth of the hoard and called upon the men to give back what they had taken, but by that time many coins had gone. The men claimed that they had given some away, sold others for twopence each (which was more than they were actually worth), or used them to buy beer with in Heywood pubs. Despite this, about 700 coins out of an estimated original total of 1,000 were recovered.

Fenton also ordered a search for the broken fragments of the jar, which was made of red-brown common clay, globe-shaped with a tapered neck, about 45cm long and 25cm in diameter at its widest point. Unfortunately not all the shards were found so the jar could not be reconstructed.

What was in the jar?
All together there was about 4kg worth of coins in the jar, but because most of them were coated in aerugo - the green rust found on copper - only about one in twenty was legible on both sides. The recorded coins belonged to the reigns of ten or eleven emperors, the dates covering the thirty years from AD 258 to AD 282 and featured the following Roman luminaries:


The last coins give us what is known in archaeology as a terminus post quem - the earliest possible date that the event could have happened. In this case that would be around AD 282, and there are two equally possible reasons why these coins would have been hoarded around that time, which was the end of the reign of Probus. Around AD 280 the governor of Britain revolted and was defeated by one of Probus’s generals, so it possible that the hoard was hidden by a local inhabitant who was wary of the increased military activity at the time. It is also possible that the coins were hoarded during the reign of the Emperor Diocletian (AD 282-305), who instituted widespread economic reforms and issued a revalued coinage. At times like this, hoards of the old, devalued coins were often hidden in the hope that they could be used again at a later date.

Whatever the reason was for them originally being hidden away, the coins were never worth much in their day. They were what was known as 'third brass', being the lowest value coins in currency. There wasn’t a single silver coin among them, although a few had been washed or plated with silver, a sign that they were ancient forgeries of the silver denarii.

Where are they now?
It is not known what happened to the small number of coins actually worth collecting from the hoard. Some of the better ones would have been given away, sold or bartered at pubs by the labourers, who also quite likely secretly hoarded some away for themselves. 19th-century Heywood resident Thomas Wolstenholme was said to have collected a number of the coins by offering small rewards to anyone who took specimens to him, but those do not appear to have been preserved. One coin ended up in Wymore, Nebraska, in the possession of John Fenton’s brother, Robert. Local metalwork apprentice Thomas Kay managed to reproduce some of the coins by electro-copper deposit, and he later found some of his creations later in the cabinets of unwitting collectors. In 1891 Colonel Henry Fishwick described the find to a meeting of the Lancashire and Cheshire Antiquarian Society, noting that his 'informant' had been in possession of many of these coins, but the number had dwindled over the years as he lent them to people who forgot to return them, and eventually the remainder were given to a clergyman and that was the last he heard of them.

If any Heywoodites have a small copper Roman coin from the above dates passed down through their family, now you know where it might have come from.


* What used to be called Hooley Wood in the 1850s became known as Plumpton Wood by the 1890s, after the construction of Plumpton Hall.

Lapinbizarre said…
John Fenton was father of the photographer Roger Fenton, was he not?
Fri Jul 27, 10:23:00 PM

Chris Dawson said…
Indeed he was. John had 6 or 7 children with his first wife, and 10 more (including 9 sons) with his second wife. If you have 17 kids these days you get your own TV reality show. It's no surprise the family had those massive halls to live in.
Fri Jul 27, 11:07:00 PM