Were People Hanged in Heywood? 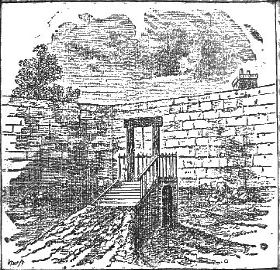 There is a widely-held belief among modern Heywoodites that, sometime in the distant past, judicial hangings used to take place behind the Queen Anne Inn. Variations on the story have trials being held inside the Queen Anne, or at the Freemasons public house across the road, and that a tunnel used to connect the two pubs for transporting the condemned prisoners from one place to the other. Some people think that the murder trials were held at the old Heywood police station on Hind Hill Street, although that was not built until the 1930s.

The gallows were said to be in a yard behind the Queen Anne Inn, and the last man supposedly hanged there has been identified as ‘Jimmy Dawson’. However, the only Lancastrian James Dawson known to have been executed was born in Salford to a mother from Bury. He was a captain in the Manchester regiment of volunteers and was hanged, drawn and quartered in 1746 at Kennington Common, London, for high treason.


These stories about hangings in old Heywood can be found in print and online, and have taken root in local folklore. But is there any hard evidence in the records to show that executions really did happen there?


The Queen Anne Inn is reported to date back to the 1702-14 reign of Queen Anne, when Heywood was a small rural village within the eastern border of Bury. The criminal justice system of England was well-defined at that time. The most serious crimes (such as murder, burglary, rape, robberies with violence) were tried before Assize courts. Less serious crimes (ones that did not attract the death penalty) were tried before the Quarter Sessions. At the bottom of the scale were the Petty Sessions, usually held in front of one or two local magistrates. As the name suggests, these courts dealt with petty crimes such common assault, breaches of the peace, minor riots and affrays, drunk and disorderly conduct, vagrancy, breaches of licensing laws or of local bylaws, etc. Certainly not any crime subject to the death penalty. Petty Sessions were the highest level of courts to be held in Heywood, and were not held inside the Queen Anne Inn itself until 22 July 1835, after which they were held every second Friday. The magistrates usually in attendance were John Fenton (MP for Rochdale), Richard Walker (MP for Bury), William Chadwick, George Ashworth, and Henry Kelsall.

In fact, Petty Sessions were not held in Bury itself until 21 March 1826, and John Fenton was appointed to that Bench in 1833, representing the district of Ashworth, Crimble and Heywood. Shortly after this, Edmund Grundy of Heap Bridge also joined the Bench, so cases involving Heywood were heard in Bury during that time.

The most serious criminal cases, including capital cases that potentially involved the death penalty, were tried at Assize courts. These were only held in selected towns, and during the 18th century the Assize judges would ride on horseback from one county town to the next to conduct trials. Assizes were held twice yearly in most counties, and until the 1830s all Lancashire Assizes were held at Lancaster. Anybody charged with committing a serious crime anywhere in the county, even in the big population centres of Manchester or Liverpool, would be sent to Lancaster for trial.

Hangings were carried out in public until 1868, and took place in or near Assize towns because that was where the courts and the prisons were. For several centuries up to 1800, hangings in Lancashire were carried out at a place called Gallows Hill on Lancaster Moor, outside Lancaster’s southern gate (although one hanging did take place at Bolton Moor). After 1800 the executions at Lancaster were moved to within the precincts of Lancaster Castle. The assize there became known as ‘The hanging Court’ because it was said that more prisoners were sentenced to death there than at any other court outside London.

This system was in place until Lancashire’s booming population required an expansion of the criminal justice facilities, and so in 1835 Liverpool was also declared an Assize town. From that point on hangings could be carried out near Liverpool’s Kirkdale Gaol. Manchester became an Assize town in 1864, and for a few years hangings were conducted outside the New Bailey Gaol in Salford. This prison was replaced by Strangeways in 1868, the same year that laws were passed to make all executions private. From that time on all hangings took place inside prison grounds or cellblocks and out of public view.

Places where executions were held in Lancashire

There are a couple of local examples to show what happened with capital cases in different centuries. Firstly, John Diggle was tried at Lancaster in 1826 for the murder of Benjamin and Alice Cass near Birtle, and was subsequently hanged in Lancaster Castle. Then in 1911, Walter Martyn of Adelaide Street was hanged at Strangeways, after a trial in Manchester, for the murder of Edith Griffiths in Plumpton Woods at Heywood. Both were local crimes that were tried in the nearest Assize town, and both culprits were hanged in those towns.

Folklore is usually passed around by word of mouth without much reference to the records, which in this case show that hangings were only carried out in important Assize towns. Even at the peak of its influence in the 19th century, Heywood only ever hosted Petty Sessions, which means that capital crimes were never tried in Heywood, and nobody was ever hanged in Heywood. The stories about hangings at the Queen Anne Inn obviously have deep roots that have spread wide, but unfortunately (or fortunately, depending on your point of view), they are just not true.

Unknown said…
Despite the article there will always be folk that believe the folklore.
Personally I'm glad it's not true, I've never been fascinated with the macabre and found the tales spooky!
I do wonder whether there is a tunnel underneath and why?
Sat Oct 13, 01:34:00 PM

Anonymous said…
I dont know if hangings took place or not but it makes good reading and history lessons
Thu Jul 04, 08:58:00 PM

Unknown said…
Someone who used to work at the Queen Anne told me there were old paintings on the walls of the cellar that had been covered over years ago
Sat Feb 13, 04:26:00 PM

Unknown said…
I read somewhere that next to the old barn in front of The Church Inn at Birtle was The Hanging Tree. Could this be true?
Fri Feb 09, 10:13:00 AM

Chris Dawson said…
No. There is a Gallows Hill around there but its nothing to do with executions.
Sat Feb 17, 12:17:00 PM