The Smallest Man in Heywood... & the World

'I remember that when I was a boy I saw a little man being carried down John Street. He was stood in the coat pocket of the man carrying him. I think he lived in Elm Street. No one remembered him when I asked some time ago and I began to think that I had dreamt it all.' (Heywood Living Memories, October 1990) 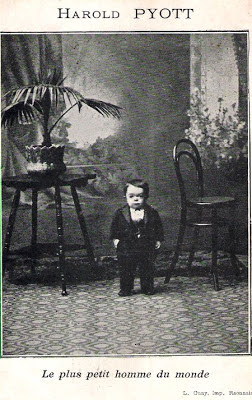 This might well have seemed like a strange dream, but in September 1937 the Heywood Advertiser reported the death of Harold Pyott in London and noted that he had lived in Heywood for '12 of his 50 years and was well known throughout the town'. Harold was a sideshow performer who was often but incorrectly referred to as "the smallest adult human being ever known to live". Did this man ever really live in Heywood?

He was born in Stockport in September 1887 to Isaac and Harriet Pyott, who were both of average height, as were his two sisters. His parents died when he was 12 and he was placed under the care of his uncle, who took him to the local doctor for examination. Harold was found to be ‘normal’ in every way except size and weight. It was reported that he was visited by some of the most eminent doctors in Europe, who declared that he had a 'strong and healthy constitution, but was certainly the smallest human being they had ever seen'.

Harold then lived at the Edinburgh home of his cousin William Beeley, who became his manager. William is listed in various records as working for the Post Office in both Edinburgh and Stockport. The exhibiting of short-statured people and midgets had been popularised by P.T. Barnum with the famous Tom Thumb (Charles Stratton). Barnum’s novelty act arrived in England in 1844 and Stratton became one the most highly paid and famous performers of the Victorian era. Many similar acts followed, including ‘Major Mite’, ‘Anita the Living Doll’ and of course Harold Pyott, who was billed as the ‘world's smallest man’ and variously known as ‘Tiny Tim’, the ‘The English Midget’, the 'English Tom Thumb', or the 'Living Doll'.

Harold travelled to various pantomimes and circus sideshows around Britain, Europe and South Africa for 35 years, and he performed before royalty on several occasions. Part of his act involved being carried around on the palm of a man’s hand and sitting in a top hat. 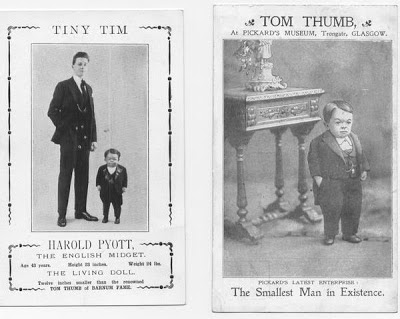 He was reported to be just 23 inches tall, some 12 inches smaller than Charles Stratton, but it was common for promoters to exaggerate the height (or lack of it) of their performers. Harold, described by one journalist as 'a perfectly-formed little man, with a small, grey moustache and a treble voice, and is a trifle bigger than a large doll', was later listed in the Guinness World Records as Britain's smallest man.

He also took part in various publicity stunts, such as the one described in Time magazine in 1924 when he and 44-stone Charles Dunbar 'astonished the countryside' by taking an automobile ride together. Harold was often reported to weigh just 24 pounds. He was, for a short time, the mascot of Stockport County FC, and during half time at their Edgeley Park home games he was carried around the pitch sat on a man's hand.

Harold had all his clothes specially made for him, and liked to furnish his home with specially-made small furniture and small crockery and cutlery. He was also said to have a liking for whisky and rum.

Legend has it that during World War 1 he was called up to the army three times because of his age, but as desperate as they were for new soldiers, the shocked recruiters turned Harold away each time.

He died in September 1937 from a bronchial infection while appearing in a side-show in Hemel Hempstead. The rather unlikely claim was made that this was the first time in his life that he had been ill. Harold Pyott was buried in the Stockport Borough Cemetery, and his death was reported in newspapers around the world.

The Heywood Connection
Doris Lake (nee Tetlow) recalled in Heywood Living Memories (January 1991) that she had been a friend and neighbour of Harold, and remembered him living in Longford Street, very close to the John Street mentioned above. A man called Clarence (no surname given) had 'discovered' Harold in Stockport and brought him back to live with his family in Heywood. Clarence's mother ran the Ship Inn and his father worked in shows, which explains the family's interest in Harold. They travelled around to circuses with Harold, always coming home between engagements.


Harold was never left alone in the house for fear of him being kidnapped, and Doris or her mother would sometimes 'babysit' him. Doris described him as a 'perfect gentleman, always courteous and particular about his appearance' who wore a gold ring that he claimed had been given to him by Queen Mary. His suits were made by Mr Bisby of Church Street. Harold slept in a regular-sized bed but needed a high-chair to reach the table. She also mentioned Harold's fondness for a glass of rum before breakfast and last thing at night, 'for his chest', although she remembers him being very fit with a 'mature voice'.

Clarence's father died and so Clarence took over the management of Harold. They would travel to nearby shows in an Austin 7, a car that that was produced from 1922 onwards, so these events would have taken place in the 1920s at the earliest. Doris also recalled a strange incident in which a man and his daughter came to their house and introduced themselves as Harold's brother and niece, but Clarence checked and found that Harold's only known relative was a cousin (this recollection is at odds with the story of Harold having two sisters). The man then claimed to be the cousin, and after a 'great disturbance' somebody was sent to collect Harold. This was the last that Doris saw of him. 'Where he went, we never found out, but somebody must know what happened to him, he was too distinctive to have kept hidden', she wrote.

From the information in Doris' account, it could be guessed that Harold went to Heywood in the 1910s. How Clarence 'discovered' Harold is not known, but by that time Harold had already toured as far afield as South Africa. It could well be that the cousin mentioned in this story was in fact William Beeley, who was managing Harold's career by at least the early 1930s. There was obviously some struggle between these men over the 'ownership' of Harold who, because of his size, had become a valuable commodity. Such was the life of a short-statured person a hundred years ago.