A Stained-Glass Window Through Time: From Heywood to Hollywood 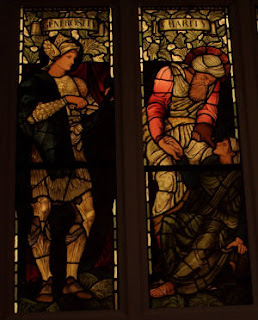 Among the masterpieces at the prestigious Huntington Library and Art Gallery in San Marino, California, not too far from Hollywood, visitors can view a magnificent stained-glass window that casts its light over a sweeping dual staircase. A closer inspection of the details will reveal it to be the ‘David Healey Memorial Window’ that somehow made it there all the way from a demolished church on Benfield Street, Heywood. That church was the Britain Hill Unitarian Chapel.

How did this remarkable journey happen?

Unitarianism was a relatively new religion in the 19th century and was not too widespread due to the fact that it had been illegal until 1813. Unitarians did not believe in the Trinity, and saw Jesus as a prophet rather than a part of God. The only known Unitarians in Heywood in the 1850s were the large Nuttall family of Broadfield Farm, Pilsworth, who attended church in Bury. They helped to bring missionaries into Heywood and the first Unitarian service was held in 1856 in a small rented room on Oak Street, on what later became the Memorial Gardens. There were only eight people in the congregation, but within 12 months the congregation had grown to the point where they needed larger premises and so they moved to a building at Mossfield.

The Rev. William Gaskell conducted the first service at Mossfield. His wife was Elizabeth Gaskell, a famous novelist who wrote North and South and Cranford. A Sunday School opened there with 50 children enrolled, and the Unitarians stayed at Mossfield for three years. The growing congregation raised funds for a new chapel and bought land at Britain Hill, off what was to become Hind Hill Street. The ground was rough and required much work by church members before construction could begin. It opened 1860, and over the years some prominent local families such as the Wrigleys and the Healeys were involved with the church. 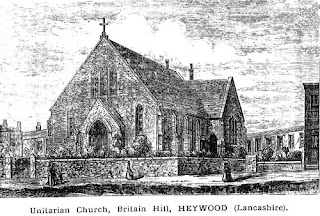 The window
In the 1890s David Healey, a mill owner and future mayor of Heywood whose father had been a prominent member of the church, donated a sum for the creation and installation of a chancel window. This must have been a significant sum because the window was designed by the famous Pre-Raphaelite artist Sir Edward Burne-Jones and created by another famous artist designer William Morris, a major promoter of hand-craftsmanship in the face of the booming Industrial Revolution. The 15-foot-high window was installed in 1898 and featured ten figures depicting the values of ‘Humility, Mercy, Generosity, Charity, Justice, Liberty, Truth, Love, Faith, Courage’. These figures were later described by Los Angeles Times art critic Christopher Knight as;


‘... a strange array of Protestant personifications of virtue, cast as secular versions of traditional Catholic saints. Truth holds a candle against the darkness. Faith reaches up to grasp the hand of God. Courage is steeled in armor while Liberty clutches a pair of crimson wings, like an earthly seraph, the highest rank of angel.’ (Los Angeles Times, 25 May 2008)

The window was in place for several decades, but by the mid-1960s attendance at the chapel had fallen and the congregation amalgamated with others in Bury. Half the windows in the now-disused chapel were smashed by vandals but somehow the chancel window survived. The cash-strapped church sold off what they could in 1967, which was a lucky move in retrospect because in 1968 a fire ripped through the building. If the window had still been in place it might well have been destroyed.

California here we come
The window was reportedly bought by a collector from the town of Carmel, California, and in 1999 it was acquired by the Huntington Art Gallery, Library and Botanical Gardens of San Marino, Los Angeles. The Huntington holds such masterpieces as Gainsborough’s ‘The Blue Boy’ and Van Der Weyden's ‘Madonna and Child’, and landscapes by Constable and Turner. The window was bought because it was associated with the respected artists Morris and Burne-Jones.


During refurbishment in 2007 a two-story staircase was enlarged to accommodate the window, now displayed as the ‘David Healey Memorial Window’. And that is how a little part of Heywood escaped fire and the bricks of vandals to end up 8,000 kilometres away in California. Given its proximity to Hollywood, the Huntington is frequently used as a location for movie shoots (such as The Muppets, Iron Man 3 and Captain America), so keep your eyes open at the cinema and maybe you'll see it the background.

Chris Dawson said…
Thanks L. :) Actually I meant to thank you in this article for pointing me in the direction of the story.
Tue Apr 02, 05:02:00 AM