The Poets, Teetotalers, Antiquarians and Bible Bashers of Victorian Heywood 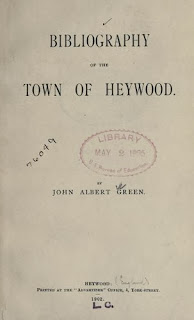 The rather splendid John Albert Green was a librarian at the Heywood Library at the turn of the 20th century. In 1902 he published his 'Bibliography of the Town of Heywood', an exhaustive list of books, pamphlets, handbooks, musical works, essays, lectures and poems associated with the town. A partial transcription of this work can be found at the end of this article.

Green produced a brilliant work on two levels. Firstly, it is clear that he was dedicated to his work in a manner that would be inconceivable today. This publication would have taken a huge amount of time to put together, yet the list of his other books (which are included in this bibliography) show he produced several other works on this same scale. This was an unglamourous task that would have brought him little public recognition and financial reward, but Green was clearly a far-sighted man who understood that many of the works he catalogued here would be forgotten by future generations if they were not documented.

He also tried to engage Heywoodites in their local history with a determination that is rarely seen in modern librarians, even with the ready availability of digital platforms and information.

What really makes this work so much more valuable than a Very Big List, however, are the numerous little biographies of various Heywood residents of the 19th century that Green includes in it.


Reading through this bibliography it becomes clear that Heywood had a very productive 'middle class' who were concerned with all matters political, religious, industrial and antiquarian. For example, the churches, and in particular the Temperance organisations, were quite prolific in their written output. Not drinking alcohol is a quiet lifestyle choice today, but in 19th-century Heywood it was a moral crusade. Journals such as 1865's Heywood Church of England Temperance Visitor were relatively common. Chemist William Beckett was the editor of the temperance-themed Heywood Working Man's Friend in 1866.

The prevalence of 20th-century pubs in the town show that the Temperance struggle was perhaps not as successful as these men had hoped.

Bridge Street shopkeeper William Dixon (1810-87) was another man keen to lecture his neighbours, as his 1852 work The thinking man's friend; or, a series of religious dialogues designed as a confutation of infidelity demonstrates.

There were plenty of other subjects covered, from the 1887 book by Mrs Alice Bell, Lessons in dressmaking. A new system of dress-making from pattern cutting to a finished dress, to Richard Eddleston's ‘Infants in Heaven: a book for bereaved mothers’, to Major William Lees 1889 address to the Heywood Literary Society on 'The History of the Alphabet’.

Yes, there was a time when the 'Heywood Literary Society' was an actual thing. It is important to remember that in the late 19th century, Heywood was a growth town with all the same pretensions as places twice its size. Heywood had just become a municipal borough in its own right, and as the local population boomed towards 30,000 people there was no reason to think the growth would slow down any time soon. Institutions like the Literary Society would have envisaged a long and prestigious future for themselves. This was how residents of some wealth and status liked to demonstrate their cultural refinement.

As is always the case (unfortunately), plenty of townsfolk fancied themselves as poets and churned out reams of verse of variable length, originality and quality. For example, Miss E Livesy gave us ‘On the distress of Lancashire in 1862. By a factory girl and Sunday school teacher at Heywood.’ (This was the height of the Cotton Famine that devastated the cotton industry in Lancashire)

‘Yet that kind friend who ne'er forgets,
That we, though weak, his children are;
Still broods in pity and in love,
O'er sad and downcast Lancashire.’

Needless to say, in an era when reading and writing were not universal skills, Heywood's working class left little material for the historical record.

There are also many musical compositions listed, such as 'Bury-street 12. 11. 12. 11', a hymn written in 1895 by John Fitton of (you guessed it) Bury Street. Other locally-penned hymns with titles such as 'Ladysmith' and 'Pretoria' remind us that the Boer Wars were a recent and painful memory.

Others dabbled in the 'Lancashire dialect' writing that was popular in the 19th century. James Staton published sketches such as: 'Kester un Betty; or, the adventurs un mischoances uv a Yewood Felly, i' th' course uv a hunt after some goose eggs, for a lad us wur afflicted wi' th' pappilarities.' ('Yewood Felly' refers to a 'Heywood man'.)

Green also catalogued reports from the rather exciting-sounding ‘Board of Trade Reports on Explosions’ from the 1880s-90s. These were accounts of incidents such as exploding tube boilers on trams.

'No. 212. Report of preliminary inquiry. No. 212. Explosion of tram boiler on 21st January 1887... The explosion occurred at about 4 40 a.m. on the 21st January 1887, while the engine was ascending Prettywood Brow, near Bury. J. Chadwick, the driver, was slightly scalded and burned about the face and one hand.'

How many of these treasures have survived to this day? Green did the town a great service by recording their existence because their titles and themes alone tell us a lot about some of the people and cultural life in Heywood in the 19th century. You can explore his bibliography for yourself below.

NOTE: Click on the black < arrow in the top left corner to remove the sidebar from the following document. Use Ctrl+F to word search this file.