'As we come marching, marching in the beauty of the day,
A million darkened kitchens, a thousand mill lofts gray,
Are touched with all the radiance that a sudden sun discloses,
For the people hear us singing: “Bread and roses! Bread and roses!”'
(James Oppenheim, 'Bread and Roses', 1911) 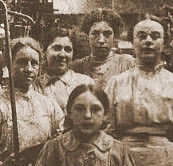 The video slideshow below (scroll down) features a number of old black-and-white photographs of the working people and children of Heywood, mostly from the early 20th century.

Many of the factory-based images are formalised photos taken for special occasions, such as royal coronations and jubilees. In the streets, shopkeepers stand proudly outside shops that no longer exist. For many it would have been one of the rare times in their lives when they faced a camera. The people are both posed and poised, and their faces look out from history with the steady direct expressions demanded by the limits of photography of the day. This creates a haunting quality, especially with the unseen shadow of yet-to-happen world wars lurking in the background with the questions, 'how many will march off to war, how many will lose loved ones?'

Some of the older people shown here would have been alive in the age of Dickens. Some of the younger ones would be known to living Heywoodites as older relatives. Between them they would have witnessed the rise, peak and decline of the Heywood cotton era. The town grew on the back of their labours, but with each passing year the mark they made on the landscape is being slowly erased and the memory of them becomes dimmer. They do, however, live on in the family lines of their descendants, and they also live on in these photographs.


More old Heywood photos can be found in books such as Hannah Haynes' Heywood.