The Road to Heywood Cemetery 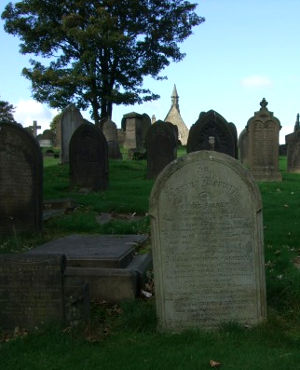 The following article appeared in the Heywood Advertiser in July 1856, in the same week that Heywood Cemetery was used for the first time. The author reminisced about his childhood walks from near the White Lion pub out along Rochdale Road East to Primrose Hill and Chamber House. John Green, local studies librarian of the 1900s, claimed that it was probably written by John Heywood (printer, poet and postmaster) but this is uncertain as Heywood was born in 1808 and although the author refers to '35 years ago' (i.e. 1821)', he also mentions being sent to bring milk in 1838. That date could be a printing error of course.


Whoever did write this piece, it is clear that Heywood was undergoing big changes. In fact, the early-to-mid 19th century was the biggest growth spurt in the town's history. Some of those changes, at least on the road to the cemetery, are well described here as the author recalls just how sparsely populated some areas of Heywood were at that time.

The romanticised and sentimental style here is typical of the time, and his recollection of setting off on a long hike each morning to collect milk from a farm sounds all very well ("With a can on our back and a stick in our hand we bounded forth with joyous hearts, often essaying to imitate the singing of the lark as it soared above our heads into the bright and sunny sky"), but it is not hard to imagine the chore of having to make the same trek in less pleasant conditions.


‘Nor strange, that recollection there should dwell,
Where first I felt and reasoned, loved and was beloved.’

Who does not love to dwell on the delightful reminiscences of childhood? Who does not love to roam where the days of his boyhood were spent? Where he picked up the acorn, where he gathered the blackberries, plucked the hawthorn blossom, collected from amongst the beautiful flowers of the field and the lane his first nosegay, the rippling brook by which he used to meander, the wayside flower which smiled upon him in his daily walks, the hum of the bee as it flitted past in search of its winter store, the singing of the redbreast, the wren, and the thrush, the tuneful rising of thee lark from its mossy bed, the shout of the merry haymakers when housing their hay, with a thousand other sights and scenes most pleasant to dwell upon?

We were reminded of many such scenes as these in our boyhood days on the road to the Cemetery on a recent visit to that place. But time has made many changes on the road from Heywood to Chamberhouse during the last thirty-five years. From the bottom of York-street to the ‘Top o'th' Orchard’ there were then no buildings but the Roe Acre, now used as a turning shop, and the row of houses at ‘Marled Earth,’ near to the house of Mr William Hartley, Sandy Lane. The house at Captain Fold, with the exception of the row occupied by Mr John Leach and others, and the rope-making establishment of Mr W. Heywood, are all of earlier date than the time to which we have referred. The beautiful residence of Mr Kay, Harefield Hall, with its rising trees, shrubberies, gardens, and neat entrance, highly ornamental to the, locality and pleasant to look upon, are all of recent date. The general features of the road from Mr Kay's lodge to the Ryecroft toll bar have not been very much altered. The trees, the hedges, and the houses are much the same. Robert Pollok, in his ‘Course of time,’ tells us of some trees near his father's house in the following words:-

‘Tall trees they were,
And old, and had been old a century
Before any day ; None living could say aught
About their youth ; but they were goodly trees :
And oft I wondered, as I sat and thought
Beneath their summer shade, or, in the night
Of winter, heard the spirits of the wind
Growling among their boughs,-how they had grown
So high, in such a rough, tempestuous place
And when a hapless branch, torn by the blast,
Fell down, I mourned as if a friend had fallen.’

'And we also know two trees, a little further on than Mr Kay's lodge. They were always known as the ‘Great Plane Tree’ and the ‘Little Plane Tree.’ They appeared old when we first knew them forty years since. They are there yet: the woodman has spared those trees. We are glad of it, for they have often served the purpose of an umbrella in a shower of rain. They are esteemed by us for their friendly protection in time of need. A little further on there was formerly a crab tree which overhung the footpath, and in the proper season used to tempt one to throw a stone and fetch a few crabs to the ground. Here is Ryecroft House, now occupied by Mr Cheetham, but at the time we refer to it was the residence of Mr Ralph Holt.

From here to the toll bar there are a few new features to record of recent date. After passing the bar we find there have been alterations of considerable magnitude since the year 1830. From the bar we formerly had to descend into a deep valley, so deep that conveyances of every kind were almost at a stand in attempting to gain the hill on the Chamberhouse side. But at the bottom of this valley there was a large watering trough fixed, from which the horses quenched their thirst previous to ascending the hill. There was also a plantation on the left hand side as we ascend towards Chamberhouse.

About the year 1838 it was our lot to fetch a can of milk every morning from the farm called ‘Primrose Hill,’ now situate on the western side of the Cemetery. It was our custom to start from the bottom of Rochdale Lane, near the White Lion public-house, about half-past six o'clock in the morning, and busy thought often conjures up ‘sunny memories’ of those happy days. With a can on our back and a stick in our hand we bounded forth with joyous hearts, often essaying to imitate the singing of the lark as it soared above our heads into the bright and sunny sky, or mocking the cuckoo as it poured forth its ever welcome morning strain, or beating the bushes and hedge-rows to start from its nest the sparrow, the finch, or any other of the winged tribe which inhabit the thickest hawthorn and briar; anon stopping suddenly to listen to the sound of the bugle blown by the road-coated gentleman who then accompanied the Royal Mail, which passed over Castleton Moor about that time in the morning with the Yorkshire letters destined for Manchester and other places in Lancashire. This mail passed over Blackstone Edge from Yorkshire about six o'clock a.m., arrived in Manchester about eight. This was in the ‘good old coach times,’ before the fiery steed of the railway king began to frighten the rustics with its fiendish shriek, making many of them vow determined opposition to such a mode of transferring human beings from town to town, many of whom have kept their word and will, we believe, do so to the end of their natural life. These were the days when the famous coach firm of ‘Bretherton and Company,’ Liverpool, were always patronised by the comparative few who then ventured as far as Liverpool, either for 'business or pleasure. It was then a fine sight to see one of these coaches come through Heywood on the first day of May, the round-faced fat, coachey, with a favour in his breast, driving four-in-hand, with his horses fully ribboned, garlanded, and honoured with the symbols of May Day. But these days, bright as they were then thought to be, have passed away, and many of their customs with them, and have been superseded by others much brighter, which are destined soon to be placed in the shade by days brighter still, through the onward progress of science and enlightenment.

The residence and farmstead opposite the entrance to the Cemetery was, at the time to which we have alluded, inhabited by Mr Robert Holt, a ‘fine old English gentleman,’ such as are but seldom to 'be met with. We always enjoyed the sight of him when we met him on the road or saw him about the grounds at Chamberhouse Farm. He is prominent in the reminiscences of our boyhood days, and 'twere well if his like could be multiplied. Strange things have happened since that time, and amongst those things we must include the selection of a site for interring the dead of this district on the Chamberhouse estate. Everyone, at the time we refer to, would have been incredulous of such an improbability. But the new Cemetery is now a fact - it has been purchased and laid out - and this week it has received the first instalment of the inhabitants of our town, and in a few years there is little doubt of its having become the place of sleep for many thousands."