A Working Class Hero is Something To Be: Charles Howarth and the Heywood Co-op 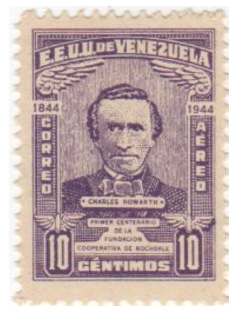 The Venezuelan government issued a commemorative postage stamp (right) during the 1944 'Centenary of the foundation of the Co-operative of Rochdale'. The stamp depicted Charles Howarth, who was born in Rochdale in 1814 and later lived in Heywood. He was one of the founders of the Rochdale Equitable Pioneers Society, creators of the famous Co-op shops that were once dotted around towns such as Heywood and became an enduring worldwide institution.

Howarth was drawn to socialism from a young age, especially the utopian philosophy of Robert Owen and his plans for co-operative settlements and labour projects. The first Owenite project in Rochdale - promoting self-employment among flannel weavers - was established in 1829, and the first Rochdale Co-operative Store followed in 1830. Howarth (a warper in a cotton mill) was associated with the first Co-op store at 15 Toad Lane during 1833-35. He was also prominent in agitation for the ‘Ten Hours Act’ that restricted the hours that women and children could work in factories.

After the failure of the first Co-operative store, Howarth and 27 associates formed the Rochdale Equitable Pioneers Society in 1844 and restarted the Toad Lane grocery store. He was one of their trustees, and drafted the society's rules. After initial public scepticism, business was quite good, mostly because of Howarth's dividend (‘divi’) system, which financially rewarded Co-op members based on their level of trade with the Society. Consumer co-operatives around the world have since followed this principle. The Heywood Industrial Co-operative Society was founded in 1850 and the first shop was on Longford Street. William Bell, a leading local Chartist, was the first manager. During the late 1850s Howarth moved to 28 Wilton Street, Heywood, and by 1859 he was auditor for the Heywood Co-operative Society and a director of the Co-operative Insurance Company.

By 1950 the local Co-op Society had 8,000 members, and the Market Street store gave them a significant presence in the town centre. There were also 17 branches throughout the districts. The last Co-op store in Heywood closed in Market Street in the mid-1980s, ending 134 years of co-operation in Heywood, although the movement still carries on in countries around the world today. Howarth's legacy was acknowledged in December 1944 when the Venezuelan government released a postage stamp to commemorate the centenary of the Rochdale Pioneers. The Co-operation movement had flourished in Venezuela and the new stamp featured a portrait of Charles Howarth.

Howarth, who was married with nine children, died at home in 1868, reportedly due to asthma, His philosophy had always been to put the welfare of others before himself, and after leaving his work as a warper during the mid-1860s he died in poverty. However, his burial at Heywood Cemetery attracted a very large crowd. A friend spoke by his graveside:


'we may say that in life he was a useful citizen; a free-thinker in religion; in political and social questions an advanced and consistent reformer; a kind and good husband and father, and a true, constant, and faithful friend... posterity will appreciate his great and disinterested services, and that we and others may be influenced and encouraged to good works by his noble example ever being present in our memory to sustain us in our endeavours.’

A museum now stands on the site of the Toad Lane shop. In 1992 a commemorative plaque was unveiled in Howarth's honour at the Angel Meadow flats, built on the site of his former home. 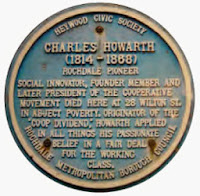