- March 01, 2015
Josiah Nuttall was the son of John Nuttall, a Heywood handloom weaver. Early in life he became a bird collector, a close observer of nature, and eventually an expert taxidermist.

The following account of his life was written by Heywood librarian J.A. Green in January 1905. 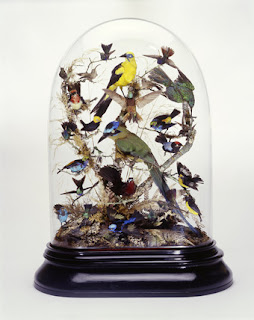 'An old Heywood worthy was Josiah Nuttall, naturalist, or ornithologist as he fondly called himself. His excellence as a taxidermist attracted the notice of William Bullock, the renowned Mexican traveller and naturalist, who had a museum at Liverpool about 1810. Mr. Bullock engaged Josiah as "'bird stuffer," and his great skill in giving a life-like appearance to any bird he preserved brought him the notice of Royalty. After the dispersal of Mr. Bullock's collection Mr. Nuttall remained in Liverpool till he had realised a competency, when he retired to his native town, where he settled next door to the Queen Anne Inn, Heywood.

He possessed a good collection of British and foreign birds, which was a great attraction to residents and visitors. Leo H. Grindon, in a passage commenting on the longevity of naturalists, names Josiah Nuttall of Heywood as an instance. As Mr. Nuttall grew older he devoted much time to reading, and, after various attempts at writing in metre, at last persuaded himself that he was a poet. He wrote in ten cantos "A wild rhapsody and incoherent remonstrance, abruptly written on seeing Haydon's celebrated picture of Belshazzar's Feast." Heywood: 1845. 8vo., pp. 140. There is a copy of this curious work in the Manchester Reference Library. The author himself calls the papers "uncouth and unique," and, to be appreciated, he would require a reader as determined as Charles Lamb, who blessed his star for a taste so catholic that he could read almost anything.

Nuttall died at Heywood, September 6th, 1849, aged 78. John Heywood referred to Nuttall in his poem on St. Luke's Old Church in the ten lines commencing: "Twelve years have only run their round."'