- March 10, 2015
The following description of some of the local people who used to sell produce at the Rochdale markets during the 1850s is taken from William Robertson’s Rochdale and the History of its Progress, published in 1913. The markets at the time were located 'between Yorkshire Street, Toad Lane, Blackwater and Cheetham Street'. 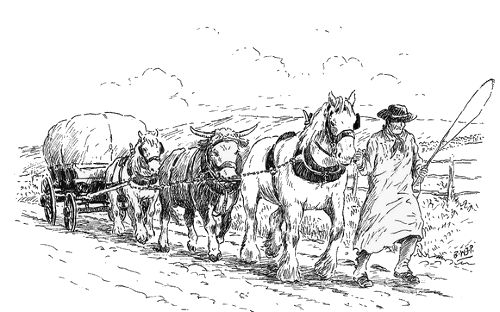 'Almost every centre of a population from time immemorial has had its markets. Early on Monday mornings up to about fifty years ago there were to be seen approaching Rochdale wains loaded with hay, drawn by powerful horses, guided by smock-frocked drivers, and sometimes healthy-looking farmer’s sons on the tops of the high loads. The hay market in those days was on the space of ground behind the Albion Hotel, Yorkshire-street.

Toll had to be paid to the Market Company. A farmer named Bridge, of Pilsworth, on one occasion called upon Mr. Thomas Whitworth, the landlord of the ‘Bishop Blaize Hotel’, Lord-street - who was the owner of the coach named William the Fourth, that travelled to Manchester daily - to solicit an order for a load of hay. Mr. Whitworth gave the order, and Mr. Bridge brought the load direct from his farm at Pilsworth to the stables of the ‘Bishop Blaize’. While it was being unloaded, the collector for the Market Company demanded toll, which was refused, and the Company’s collector seized a truss of hay and carried it away. Mr. Whitworth took legal proceedings, and finally the Company refunded the value of the hay and paid all the costs.

The Hay Market ceased to exist on account of tradesmen carrying on the business in buildings in various parts of the town. A Potato Market was also in existence in those ancient days. It was held on the space of ground before the New Market Tavern and the Woolpack Hotel off Yorkshire-street. The farmers of Pilsworth, Hopwood, and Middleton brought cart-loads of potatoes on Mondays, and from half-a-dozen to a dozen cart loads of fine flowery potatoes were regularly to be seen there. The farmers, when they had sold their potatoes, took back loads of manure from Rochdale.

The village of Hebers, which is situated between Middleton and Bury, was for many years almost solely inhabited by silk weavers. An old silk weaver, who went by the soubriquet of Fat Joe, took a delight in producing different kinds of potatoes from potato apples. He brought to perfection the fluke potato, Fat Joe potato, and the Radical potato, which were sold all over the kingdom. He was a remarkable cottage gardener, and took a great pride in raising a new class of potato. His patience almost rivalled that of Job. He often visited the Rochdale Potato Market, and was so thoroughly absorbed in examining the potatoes and picking out different ones, that the playing of a brass band in the adjoining street did not attract his attention. When he returned home his coat pockets were usually bulged out by potatoes, some of which he would set, and when they produced a potato apple he would spend four or five years in producing a new kind of potato from them. It is said that most people bear a great resemblance to their favourite study or hobby. So it was with Fat Joe, for he bore much the appearance of a potato.'