The Papermakers of Heap Bridge 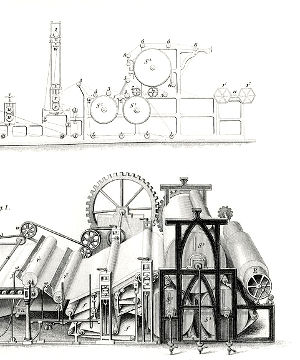 Heywood was, for several centuries, little more than a hamlet within the boundaries of the small eastern Bury township of Heap. It was only after the rise of the local cotton industry in 18th-century Heywood that these positions were reversed and Heap became a part of its expanding neighbour.

Cotton manufacturers had limited physical space to develop their industry at Heap Bridge. One side was bounded by the River Roch and Bury, the other by steep hills and established farmland, and the prime riverside land there was already home to a thriving papermaking centre.

While cotton production did not commence in Heywood until the Wrigley Brook mill opened in the 1770s, there was a woollen mill operating at Heap Bridge by the late 16th century, and George Warburton was running a paper-making operation at Bridge Hall Mills in 1716. Warburton’s mills produced white paper, which was quite unusual as most paper made in Britain at that time was brown or wrapping paper.

Warburton died in 1721, and by 1766 the mills were being run by Thomas Crompton. Over to the west, Bury was developing into a major papermaking centre itself, and the district contained eight of the 14 paper mills in Lancashire. The local paper boom was helped by the presence of the soft waters of the Roch, local coal mines, and the emerging cotton industry. Until the late 18th century, paper was largely made from rags, a raw material that was quite hard to find and sometimes had to be imported from as far away as Russia. However, the growing number of cotton mills in Heywood provided a steady supply of cotton waste for the paper mills, and the cotton industry also became a major customer for paper by using it for packing.


The Bridge Hall Mills boomed under the ownership of the Wrigley family during the 19th century, after ‘Owd Jimmy’ Wrigley took over the mills after the death of Crompton in 1810. It was his son Thomas who did the most to expand the business, which he ran from 1846 to 1880. Thomas bought up much of the local land from the Nuttall family and, using his contacts as a railway company director, he persuaded the Lancashire & Yorkshire Railway Co. to open a freight-only branch line to the paper mills by 1880. This line was used to transport raw materials in from (and the finished product out to) the main ‘Liverpool, Bolton and Bury Railway’ line (now part of the East Lancashire Railway).

Thomas Wrigley was a politically-active philanthropist, campaigning on issues such as household suffrage and educational reform, but these stances sometimes lost the company unsympathetic customers. Most of the output of the Heap Bridge Mills until the 1860s was newsprint for local and national newspapers, including the Manchester Guardian and The Times. He also wrote The Case of the Papermakers, a book calling for economic assistance for the industry.


Thomas forged a close working relationship with the Grundy family, who bought the Bridge Hall estate in 1817 and ran the nearby Heap Bridge Mill. There were at least five marriages between the Wrigley and Grundy families.

Bridge Hall Mill became one of the largest paper mills in the world and stretched for half-a-mile along the banks of the Roch. In February 1915 it was the scene of one of Heywood’s worst industrial disasters when a new concrete roof with a faulty design collapsed on 20-30 construction workers below, killing eight men and injuring eight others, some of them seriously. One man later died of his injuries. The dead victims were:


Wrigley’s company went into voluntary liquidation in 1924, but a new company called Transparent Paper Ltd renovated the mill and commenced cellulose film production there in 1928. This business continued until about 1980, and the premises were later home to Tetrosyl Ltd and Printpack Europe Ltd.

Another major paper manufacturer at Heap Bridge was Yates Duxbury & Son Ltd, which took over the insolvent Heap Bridge Paper Co. in 1882. That mill had closed two years earlier and ‘distress and actual want had come to the village’. The new operation failed within two years and Andrew Duxbury (eldest son of Yates) was declared bankrupt, but his brother Roger restarted the mill. (He was called Roger Duxbury Duxbury, thanks to a mistaken response by his godfather at his Christening). Roger was an energetic and forward-thinking businessman and made a success of the company. Typical of his thinking was the installation of electric lighting in 1887, and it is believed this was the first mill in Lancashire with this new source of illumination.

Duxbury’s eventually ran two mills in the area, the last one closing in 1981. These mills continued to use steam locomotives on the freight line until the 1970s, and these locomotives are now part of preserved railways.

There were also several other papermakers around Heywood over time, including JR Crompton at Simpson Clough; Turner & Parker (Rochdale Road); William Henry Andrews (Rochdale Road, 1880) and Edwin Hardman (Bradshaw Street). However, much like cotton before it, the local papermaking industry eventually succumbed to changes in the manufacturing industry and of all these Heywood paper factories, only the Crompton facility is still in operation.

Roger Mortimer said…
Yates Duxbury and Transparent Paper were thriving and stinking (the smell from one or the other could be appalling) in my Grammar School days. Passed them daily going to and from Bury. Did not realize that the paper industry was as long-lived or important in the area as it was. In the 50s - the good old days just before environmental legislation began to be introduced (the mid-50s smogs were beyond belief - but that's beyond our scope), the Irwell was often coated with foot-thick white foam from the upstream paper mills. One high-windy day, huge (4-6 feet long) wedges of river foam were blowing 100s of feet high above the river. When you next view David Lean's "Hobson's Choice" (a film which incidentally accurately shows how Victorian industrial towns in the Manchester conurbation still looked in the mid 50s) watch for a riverside scene, shot by the Irwell - the foam of the Bury/Heap paper mills is visibly on the river.
Fri Apr 17, 02:13:00 PM

Chris Dawson said…
Thanks Roger. I do often overlook the environmental impact of industry in Heywood. It's only recently that the Roch has returned to life and I recall as recently as the 1980s seeing flourescent pink industrial waste emptying into the river from an outlet. There was still a bit of that foam about from time to time too.
Sun Apr 19, 11:14:00 PM

Unknown said…
I was very interested to come across your web-site as my grandfather, James Bridge 1886-1956, worked at the Duxbury Paper Mill. Apparently, according to my mother, he was very proud of his association with the mill and it seems likely, from the listings in the census forms, that he may have always worked there. In 1901, he was an errand boy but his marriage certificate lists him as a Paper Mill hand, the 1911 Census as a wood bleacher in the paper mill. The England & Wales register of 1939 has him working at Bedtermay Paper Mill doing heavy work and on his death certificate,he was a paper maker (retired).
The next stage of my family history journey is to investigate these mills further. If you have any advice as to the types of records that may have been kept of the workers I would be pleased to know.