A Soldier's Letter From Khartoum, 1898

- May 25, 2015
In September 1898, the 2nd Battalion Lancashire Fusiliers engaged in the Battle of Omdurman, Sudan. This took place 13 years after the famous seige of Khartoum and was part of the eventual recapture of Sudan by the British.

Among the Heywood men who took part in the battle was Private J Carruthers, who later wrote this letter home: 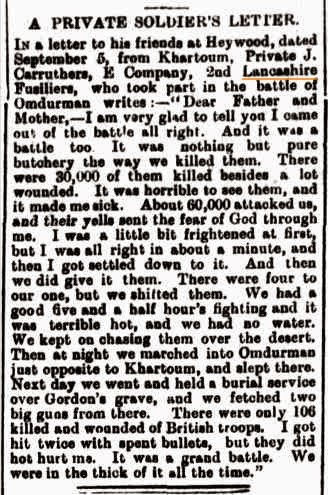 At 0400 hrs, the Division was stood to, Lyttelton's Brigade was on the left of the Infantry position, with its left thrown back to protect that flank. They had the Nile at their backs. The Brigade was formed as follows:-

2nd Rifle Brigade on the left, then 2LF, then 1RNF and 1 Warwicks on the right. The Brigade had 6 companies in the front line and 2 companies in reserve.

At 0630 hrs, the first sighting of the enemy was made, a vast mass of Dervishes moving opposite the British centre. A vast multitude, rushing onwards like a sea that nothing could stop, came the Dervish mass.

At 0650 hrs the Artillery opened fire, along with the gunboats. At 0720, with the huge mass getting ever closer, 2LF were moved to the right of the 1st Brigade to strengthen the Camerons. A Battery of guns was also placed here on the left,and the Rifle Brigade was also added to this flank.

On the enemy came, with loud angry shouts, and bullets began to arrive amongst our troops. The concentrated fire of the whole front then engaged the enemy and when the smoke cleared it was clear that the enemy had suffered appalling casualties. They stopped, and surged backwards. When the cease fire sounded, only a few thousand of them were left firing from a depression in front of 2 LF.

At 0900 hrs, the whole of our force moved to the left in echelon of Brigades to try and get between Omdurman and the remaining mass of enemy. During this move the enemy attacked, hurling thousands of men in 2 masses against McDonalds Brigade. By some very skilled Infantry tactics, McDonald repulsed these attacks and by 1230 hrs the battle was all but over.

There were some amazing statistics.

Modern arms and superb tactics in the hands of highly trained soldiers had proved to be too much for the overpowering numbers of the Dervishes, who's only hope would have been at close quarters. The British Infantry fire power and marksmanship ensured that they were never to get close enough to let their numbers count.

2LF, along with the Brigade, then marched to Omdurman town, formed a line on an extensive parade ground found just to the West of the town. They sank to the ground exhausted and slept regardless of the gruesome surroundings.

The moon shone brightly that night on the field of the dead and by dawn, the men were only too pleased to move away from the stench of thousands of dead men and animals to a more favourable location. Gordon had been avenged.

2LF were to move to Alexandria by boat, then to Crete, where they arrived on October 11th 1898."

nbuch said…
Thanks, Chris. Much appreciate your work here in military history. Have you linked up Jeff Hopkins-Wise on this. I'll let him know.

What strikes me from the account is that this one of the few accounts where a force from a industrialised nation had a clear advantage in weaponry and tactics against a larger indigenous force, excluding outright massacres of civilian centres. Gordon's Khartoum was the rare moment where military fortunes were reversed.

With that in mind, it seems to me that it is even rarer (if there is an example of such a battle) that a force of industrial nation is defeated in battle against a pre-industrial 'state' in our contemporary history. I suppose one could point to the defeat of the French at the Battle of Dien Bien Phu in 1954, however, the Vietnamese were well-supplied with heavy artillery, presumably coming from Communist China.
Mon Jun 01, 04:55:00 AM

Chris Dawson said…
Thanks Neville, but this is just me posting a small newspaper snippet and adding a bit of background, no more than 15 minutes work. I would never call this 'work in military history' myself.
Tue Jun 02, 12:53:00 AM