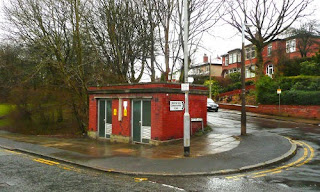 The aim is to assemble as complete a list as possible of the air raid shelter locations around Heywood. Can you add to this list?

Also, any photographs of air raid shelters would be appreciated. Special thanks to all the people on the 'Remembering Heywood' Facebook page who have helped with this.

Unknown said…
I remember the ones on Bradshaw Street, they were underground. Probably still there till Planet Play was built
Mon May 18, 07:35:00 AM

David Nuttall said…
Hi, I use to live at 132 Starkey St, There was one behind our house I never actually saw it but remember the foundations for it we use to have our bonfire on it. The one I do remember was behind Miller St/ Shadwell St East & Ann St. As kids we use to try and get into it, Think it got pulled about 1970, plus I think there was one behind Tonge & Buckley St, it was at the back of the mill that made gloves, Hope this helps, it would be good to see where they were all was. Cheers David Nuttall.

audrey bridge said…
Hi I lived at 71 Cedar Ave and there was one in our back garden going down the back, my Dad flagged the back with the tops when it was knocked down, ( most likely still there) Also Underground ones on Pilsworth Rd ,the ones in Bamford Rd School yard, one in lower yard and one in top yard, we sat on steps at playtime, but the doors was bricked up, then they filled up the steps levelling the yard, another was on Oak St near the allotments, can't think of any others Audrey

audrey bridge said…
I lived at 71 Cedar Ave 1945 and we had one in our back garden it went down the back my Dad flagged the back garden with the tops when it was knocked down, ( most likely still there) one on Oak street near the allotments, Pilsworth Rd underground ones near bottom Tower St, remember sitting on steps of underground shelters in Bamford Rd school yard, one in lower yard and one in top yard, doors had been bricked up , then steps where filled in and levelled,
Tue Jun 09, 11:33:00 PM

Anonymous said…
Reading down the list of Air raid shelters, some more I think I can add are, back of Agincourt St between New York St and Kershaw St, Pilsworth Road behind Bridge Inn (brick House).
When Millbank House off Nellie St was about to be pulled down I can remember see one underground in the front gardens at the top end away from Nellie St.
There was one at the corner of Garden St/West Starkey St
Channing St was off Todd St now is called Edgeworth Close
hope this is of help

phil said…
i remember in the late 70 early 80 as a kid the bullough moor shelter steps going down which where later backfilled. also at one point a square hatch was removed which was parrallel to the steps. when you looked down 4 corridors extended in all directions. one towards the stairs one away from the stairs. one towards the school and one towards the centre on the field. i assume its all still there just buried. you can see concrete bits in intervals along the long grass part on the field
Tue Aug 11, 11:37:00 PM

Anonymous said…
there were two concrete and brick shelters on the site of what is now queen st. nursery. one opposite hartland st. the other opposite holland st. we used to use the holland st. one. windy bank was on hartley st. behind york st. congregational church and atkinsons printers on church st. which is now the telephone exchange. it was pronounced wind as you would a ball of wool. i was brought up in hilda st. and went to st.lukes school. the shelter we used was in the school yard it had two entrances behind the school house and went back under the houses on starkey st.
Thu Dec 31, 09:19:00 PM

M Johnson said…
I was at Bullough Moor from 1959 to 1966...my Dad was Headmaster there from about 1948 to 1968. There were two sets of stairs leading from the playground down into the shelters built under the playing fields at the back of the school. Needless to say they were bricked up but I remember a square hatch being broken open and being able to see down into the corridor of the shelter below. Not much to report..damp with bits of debris. - Martin Johnson
Mon Feb 27, 01:48:00 AM

M Johnson said…
I was at Bullough Moor from 1959 to 1966...my Dad was Headmaster there from about 1948 to 1968. There were two sets of stairs leading from the playground down into the shelters built under the playing fields at the back of the school. Needless to say they were bricked up but I remember a square hatch being broken open and being able to see down into the corridor of the shelter below. Not much to report..damp with bits of debris. - Martin Johnson
Mon Feb 27, 01:49:00 AM

Unknown said…
One at the entrance if the steps to Conway close on Higher Lomax lane it may have been for the Wilson family who owned Higher Lomax farm. The council used to have to re lay the flags in summer dye to the entrance rising. My mum and dad knew it was there and was strictly told to keep away from it in the 1980,s
Thu Sep 07, 09:13:00 AM

Mike Kay said…
The shelter down the end of Wilton Street where it ended at the park, which I think was called Sparrow Park, had underground tunnels that were visible on Pilsworth Road where the sand had been washed away by the rain. The 2 curved tunnel ends were just visible and made of concrete. Never went inside as they were in a fenced allotment.
Michael Kay
Fri Dec 14, 10:41:00 AM