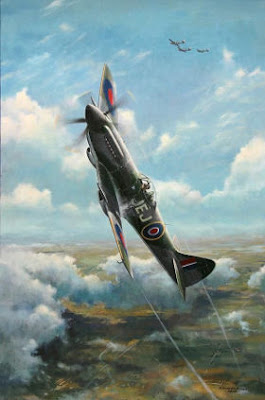 The full flight history for two Heywood Spitfires (MK Vb W3898 and Mk Vb EP646) has been revealed for the first time, thanks to Councillor Alan McCarthy.

Both Spitfires had work completed on them at the RAF Maintenance Unit in Heywood (35MU)) during the Second World War. 35MU closed in 1967 and is now the Distribution Park.

602 Squadron originally formed in 1925 as a light bomber squadron, its role changed in 1938 to army co-operation and in 1939 to that of a fighter squadron.

During the Second World War, the squadron flew Spitfires and took part in the Battle of Britain.

In July 1941, it arrived in south-east England to take part in sweeps over France for a year before moving back to Scotland.

19 Squadron was stationed in the UK after the outbreak of the Second World War, reforming on 1 April 1924 at Duxford and was part of No. 12 Group RAF, RAF Fighter Command, during the Battle of Britain.

No.350 Squadron was formed at Valley on 12 November 1941, as the first Belgian-manned fighter squadron.

Equipped with Spitfires, it became operational on defensive duties on 22 December and moved south in April 1942 to begin flying sweeps over northern France.

No.322 Squadron was formed at Woodvale on 12 June 1943, from No.167 Squadron which had a high proportion of Dutch personnel and was already operational with Spitfires Vs on defensive duties in the Irish Sea area.

At the end of December 1943, it moved south to Hawkinge and began flying convoy patrols and sweeps over the Channel for two months, before moving to Scotland for tactical training at Ayr.

The Central Gunnery School transferred in from RAF Sutton Bridge in March 1944, continuing its role of training experienced aircrew to become Gunnery Instructors for both Fighter and Bomber Commands. The principal aircraft used were Spitfires and Vickers Wellingtons, together with support aircraft for roles such as target towing.

Between 1941 and 1945 Pembrey was host to the RAF's Air Gunnery School, involving Bristol Blenheim and Vickers Wellington bombers and Spitfire fighter aircraft, and included experimental courses.


Spitfire Mk Vb EP646
The Spitfire Mk Vb EP646 was built at Castle Bromwich Aircraft Factory. It was delivered to Heywood 35MU on 19 July 1942 after a Cat AC flying accident (repair is beyond the unit capacity, but can be repaired on site by another unit or a contractor).

On 20 February 1941, No. 118 reformed at Filton as a fighter Squadron equipped with Spitfires. On 28 March convoy patrols began and in June the Squadron began to provide bomber escorts and took part in fighter sweeps over northern France. In January 1943, it moved to East Anglia and began sweeps over the Netherlands, moving in September to northern Scotland on defensive duties.

In January 1944, the Squadron came south again to join Second TAF but returned to the Orkneys in March for four months. Sweeps and bomber escort missions were resumed in July 1944 and in January 1945.

Thanks to Cllr Alan McCarthy, Armed Forces Lead Member for Rochdale Council, for providing this article to 'Monkey Town', January 2017.