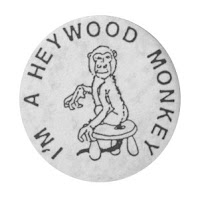 The following article about the nicknames of various English towns - including Heywood - appeared in numerous Australian newspapers in the year 1900:


"Many towns bear nicknames reflecting what are supposed to be their characteristics. To inquire whether such sobriquets fit, whether they are apt or otherwise, would be an endless and unprofitable task. They exist, they are used, and to argue about them is as futile as injudicious.

Numbers of place nicknames 'hit off' an alleged inordinate fondness for something or other. Bolton is called ' Trotter town’ because the natives are believed to have a great partiality for that delicacy. Macclesfield, for a similar reason, is derisively styled ‘Treacle town’. The story goes that 'once upon a time' a cask of the sticky edible fell off a lorry as the mill hands were going to work, and bursting, sent a stream of golden syrup running down the street. Thereupon the factory lads and lasses threw themselves on the ground and supped with avidity at the cloying river till all of it had vanished.

To a smaller section of the community Belfast is known as ‘Tea town', the origin of which nickname is obvious to those versed in the vagaries of popular place nomenclature. It is due to the circumstance that people of the city are great tea drinkers. They are so fond of the cup that produces dyspepsia that they discuss the merits of different blends of the China and Ceylon leaf with as much interest as Glasgowegians discuss the merits of different brands of whisky. If tea were to become anything like so largely used in other parts of Great Britain as it is in Belfast, the trade would soon he remarkably prosperous.

Aberdonians are reputed to have a more common weakness - a great love of the 'siller.' [money] Hence their town has another synonymous appellation besides that of ‘the Granite City’. It glances forcibly, if vulgarly, at the reputed meanness of the natives, who are said to be more than a match even for the Jew, with all his genius for money making. All Scotland believes that the few Hebrews who have had the temerity to invade the town have had to sell their shirts to get away, and that they are seized with a shivering fit every time they hear the name of Aberdeen mentioned. Certain it is, at all events, that the city, unlike many places considerably smaller, has no Ghetto.

Another class of local nicknames are the outcome of that form of facetiousness which labels towns with the epithet of ‘silly’. They are begotten by such rivalry as that which between Halifax and Huddersfield. Heywood, in Lancashire, is popularly known as ‘Monkey town’, presumably because the natives, like those of Kent, are thought to be born with tails.

In most parts of East Yorkshire, again, it is common to have a fling at Bridlington by styling it 'Jackdaw town' and its inhabitants as 'Bolliton Jackdaws’. If the stranger inquires the reason of this, it is soon forthcoming. A number of men - thus the legend runs - were repairing the roof of the Priory church at Bridlington. During the operations they wished to get into the sacred edifice a beam of timber longer than the door was wide. How to manage this they did not know. One was for sawing the wood in two, while another was for knocking away some stones and making the doorway wide enough to admit it. While they were cudgelling their brains over the weighty problem they saw a jackdaw take a straw into an opening in the steeple above - which it did, of course, lengthways.

' Let's see if this here beeam'll gan in th' seeam way,' thereupon suggested one of the men.

This proposal was agreed to, and as a consequence the beam was got into the church without further delay.

Other place nicknames are compliments used in a backhanded fashion. Cork is doomed to be ever contemptuously spoken of as 'the Beautiful City’, because a stupid versifyer once called her so in sober earnest. Or, at any rate, he did not give her that name in derision. Since Mr. Gladstone, in a moment of amiable weakness, dubbed Manchester the Modern Athens - where is Edinburgh? - she has likewise had the term flung at her over again. Another place which may perhaps wish to be delivered from its friends is Birkenhead. A good many years ago a local magnate, venturing on prophecy, said it was 'the city of the future' is bound to be fallen back upon sooner or later.

There are, moreover, not a few place nicknames decidedly puzzling. Hinckley, in Leicestershire, is, locally, 'Tin Hat town’, but how the sobriquet originated is a mystery. A greater enigma still is the nickname of Amberley, in Sussex - namely, 'God knows’. Strange indeed is it to hear people say that they are going to ‘God knows’. This singular specimen of place nomenclature is incorporated in a well-known rhyme:

‘Amberley - God knows.
All among the rooks and crows.
Where the good potatoes grows.'

But its precise significance is beyond conjecture.

Some local nicknames are highly offensive to those to whom they are applied. On one occasion a wag counselled a lecturer who was about to address a gathering of Dorset agricultural labourers to apply to them a certain epithet, telling him it pleased them immensely. The gentleman suddenly recalled this advice when he was speaking to his audience. At the very moment it rushed into his mind he was using the perilous weapon of irony. When, therefore, he used the nickname, his intelligent hearers, rather uncomfortable before, rose in a body and howled at him. Indeed, some threatened him with personal violence, and, had it not been for the presence of local gentlemen, who explained that the speaker had not the least intention of using the epithet in an offensive sense, he would have been in an awkward predicament. Nicknames require to be handled carefully."