- September 03, 2015
Heywood might not have a famous footballing tradition, but the sport was clearly a big part of town life back in the 1880s. The FA Cup had started back in 1871, a new national league was being formed, and a number of local clubs dreamed of competing at the highest levels of the national game. The Heywood teams of that time never did hit the heights of footballing success, but they did brush shoulders with some legendary names and often managed to hold their own with their championship-winning neighbours Bury. During some early seasons home games at Bamford Road would normally attract a few thousands fans, and they even hosted the likes of Liverpool and Manchester United - and won.

Heywood teams in the Lancashire League 1889-95
Back then (as now) Heywood was at the centre of one of football’s regional powerhouses. Association Football was booming in the 1880s, and when the first ever Football League season was played in 1888-89, Lancashire provided half the clubs. As is always the case with football, success was built with money, in this case coming from the cotton industry tycoons. The county was also a hotbed of non-league action, and in 1889 the Lancashire League was set up by the top sides outside the senior competition. This was one of the strongest competitions in the country, and clubs such as Blackpool, Bury and Liverpool showed that it could be a quick stepping stone to the Football League. There were a number of amateur teams in Heywood at the turn of the century, including Heywood Olympic, Heywood St James, Heywood West End, Heywood Alexandra, and Birch Rovers, and the Lancashire League featured two Monkey Town teams among its founding members - Heywood FC and Heywood Central.

Heywood FC made their first appearance in the FA Cup in the 1891-92 season, reaching the second qualifying round before withdrawing from the competition before they could play their opponents, a certain Newton Heath FC. They instead played a friendly against Newton Heath, which they lost 3-2. Football at this time was still in its early stages and on-field disputes were common, although often resolved by the captains. For example, the Southport Central captain almost withdrew his men during a match against Heywood in 1888 because of the referee's 'one-sided decisions', but they stayed on and lost 3-0. However, in the return game the Heywood team left the field disputing a Southport goal and, despite leading 2-1 at the time, they forfeited the match.


Heywood FC left the Lancashire League in 1892 after finishing bottom of the table with only one win from 22 matches. This was their record from their time in that league:

Despite this setback, their proudest moment came in 1900 when they won the Lancashire FA Challenge Trophy, also known as the Lancashire Junior Cup, which was a knockout competition for senior non-league members of the Lancashire County FA. They beat Parr 2-0 in the final before a crowd of 1,000 in Preston and upon their return the team were paraded through Heywood with the mayor and a brass band. This was the same year that Bury first won the FA Cup. By this time Heywood FC were playing in the Manchester League and in 1902 they won the Manchester Junior Cup (predecessor of the competition won three times by Heywood St James a century later).

Judging by their appearances in the FA Cup and their league performance, Heywood Central were the premier team from Heywood in the 1880s and early 1890s. They had played in the first round of the FA Cup in 1887-88, losing 8-1 away to Higher Walton, but they managed to make something of a splash in the Lancashire League, finishing in third position in each of the first two seasons. In November 1889 they also featured in the first-ever floodlit game at Bury’s Gigg Lane, beating their local rivals 5-4 in front of a crowd of 7,000 who watched the match under ‘Wells Patent Lights’. This was a charity match, and a floodlit game against Bury in Heywood that same season drew 5,000 fans. The score was 1-1. These results were no mean feat, as Bury were the Lancashire League champions for two seasons running from 1890 (Higher Walton were the inaugural champions). In fact, Bury considered Heywood Central to be their fiercest rivals at the time. In October 1891 Bury knocked Heywood Central out of the FA Cup, winning 2-1 away. The Heywood teams best run in the FA Cup came when they reached the 4th Qualifying Round in 1890-91 before losing 2-1 against Halliwell.

The main football ground in Heywood at this time was off Bamford Road, on the site where the Squash Club used to be. This field had a grandstand to house the spectators.


In December 1892 Heywood Central played a home friendly against a newly-formed club called Liverpool FC, drawing 1-1, and a few weeks later they travelled to Anfield for a league match. Heywood Central had recently thrashed reigning champions Bury 5-1, and their presence in Liverpool attracted ‘great interest’. Liverpool were on their way to winning the league themselves that season, however, and they beat Heywood 6-2. In fact, Liverpool would be national champions within ten years. The following week the return game was played in Heywood in front of 1,000 spectators, who saw the visitors come from behind to win 2-1 in blustery conditions with six inches of snow on the field!

A number of players left Heywood Central around this time (see below), and the club dropped out of the Lancashire League after a disastrous 1894-95 season in which they lost 23 of their 26 games, conceding 171 goals in the process at an average of 6.5 per game. 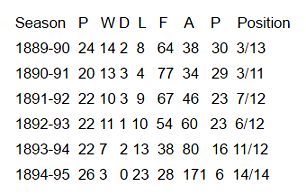 For Heywood Central it was a case of ‘what might have been’. As they slid into obscurity, the clubs they had been battling so closely with, Liverpool and Bury, were both elected to the Football League in the 1890s and within a decade were winning league titles and FA Cups.

Heywood FC joined the Lancashire Combination in 1902 and finished 12th. However, the following season the club left the league midway through the campaign and their records were deleted. The club was disbanded in 1904.

United re-joined the Lancashire Combination in 1907-08 and their opening home match against Bacup (a 2-2 draw) attracted 2,500 spectators. They also played two friendlies, one against the Welsh Druids (a 6-2 win) and a 'benefit' match against Manchester United which they won 2-0. This game was arranged as part of the transfer deal which took Heywood United's highly-rated Anthony Donnolly to the Manchester club (who won the FA Cup the following season).

Heywood United unexpectedly found themselves in the Lancashire Combination First Division in October 1911 when they replaced the suddenly-disbanded Earlestown. Their own place in Division Two was taken over by Barnoldswick United. The best position achieved by Heywood United was 12th in Division 1 during that same season. In 1914 the club made a huge signing when they spent £800 (millions in today's money) to being centre half Andy Browell from Everton, but this did not prevent them from being relegated to Division Two. Browell (brother of the more-famous Tommy) seems to have gone nowhere with his career.

Despite this disappointment, Heywood United proudly followed in the footsteps of Heywood FC and won the Lancashire Junior Cup in 1914, beating Leyland 4-0 in the final in Fleetwood. The crowd of 3,000 contained over 500 Heywoodites who had travelled to the match by special train. When the team returned to Heywood Railway Station they were greeted by a huge crowd and were paraded through the town in a wagonette preceded by the Heywood Old Band.


Heywood United left the Lancashire Combination one season later after finishing fifth in a reduced division. World War 1 had broken out and clubs were advised to fulfil player's contracts while allowing fit men to enlist. They were also asked to create rifle ranges for the players. The league suspended ‘normal operations’ during 1915-1919 as a result of the war, and some of the league’s member clubs stopped playing, while others joined ‘mini-leagues’. In 1919 the Lancashire Combination proper resumed with a single division, but Heywood United never played again. 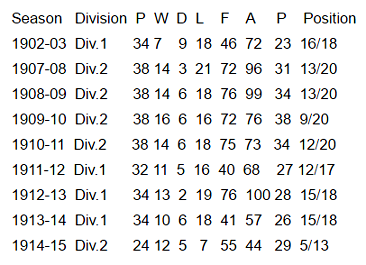 Decades later there were stories that the club had folded after many of its players had been killed in action on the fields of Flanders, but the disappearance of the club could be linked to debts. It has been reported that in the 1960s a person trying to start a new club called Heywood United received a letter from a solicitor explaining that such a club would be responsible for the large debts incurred by the earlier club of that name. Unsurprisingly, the new club was not formed.

A few internationals also passed through Heywood during their careers, including John Plant, who had not only won two FA Cups with Bury but had scored in both finals. He signed for Heywood United in 1906 and the following year his former Shakers teammate Billy Richards joined him there.

Dan Cunliffe was a much-travelled forward who played for Heywood United 1909-12. He also played for Liverpool and Tottenham and was an England international. At the time of his death in 1937 he lived on York Street, Heywood.

Another player to join the Heywood Central exodus in 1894 was Tommy Crawshaw, who signed for Sheffield Wednesday, where he won both the FA Cup and the First Division title twice, and also played for England ten times, the first time being less than one year after he left Heywood.

Unknown said…
Ah the heady days of footy when you could actually pronounce the footballers names LOL
Sat Apr 13, 05:58:00 PM

Terry said…
There was a lad called Ian Cunliffe in my class at St Joseph's in the 1960s, played centre forward for the school team and was a great goal-poacher. Lived on Wilton Grove. Wonder if he was a descendant of the famous Dan.