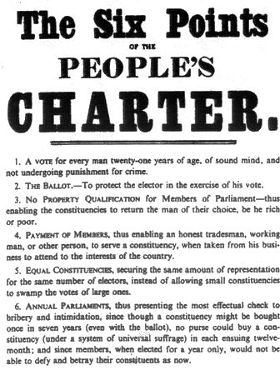 The Industrial Revolution transformed British society, and during the early decades of the factory system this change was usually for the worse in the case of workers. This led to constant political and social upheaval throughout the 19th century, and Heywood - being in the heartland of the Industrial Revolution - was often caught up in those events.

The major British working-class political reform movement during 1838-58 was Chartism, a national campaign with notable strongholds of support in the north of England, the Midlands and Wales. Chartists fought for better political representation for workers and took their name from the 'People's Charter' of 1838 which demanded - among other things - votes for every man 'of sound mind' who was not undergoing punishment for a crime; making voting a secret ballot; allowing poor people to stand for election by removing the Property Qualification requirements for prospective MPs; and creating equal-sized constituencies.

In the other words, in early 19th-century Britain:

The Chartists used mass meetings and petitions signed by millions of people to put pressure on politicians to change this situation.


The first major stirrings of activity hit Heywood in 1840:


‘A crowd of Chartists met this morning, and having received information that they would be joined by a party from Middleton, they, after some consideration, began a march towards Rochdale, but were turned back. They then returned towards the place from whence they had set out, and the road leading into and through Heywood was soon crowded by groups of men, women, and children of the working classes. The military, with the magistrates Messrs Chadwick and Ashworth, of Rochdale, at their head, drove the main body of the Chartists to the hollow place opposite the White Lion public house at Heywood. The magistrates were at this time exerting their influence to persuade the people to disperse; but many of the latter evinced an exceedingly sullen disposition. The whole highway here was filled with people; at the Freemasons' Inn the special constables, or rather some of them, were collected, and Mr Turner, the deputy constable, was here to superintend them. From thence to the end of the village the street was crowded and the whole bore an appearance of outrage and conflict. In consequence of these threatening appearances, the magistrates despatched an express to Manchester for military assistance; and a troop of dragoons and two companies of the 79th Highlanders were despatched by Colonel Wemyss about five o’clock. They were accompanied by Paul Moon James, Esq; and on their arrival at Heywood, found that the military force from Rochdale had been compelled to return to that place, leaving Heywood completely to the prey of the Chartists. No violence, however, had been committed, and the arrival of the military (who still remain there) removed the apprehensions of the inhabitants.’ (Manchester Guardian, 18 April 1840)

The Chartists were involved in a wave of strikes that engulfed Lancashire and Yorkshire in 1842. The unrest had originated in July that year among miners in Staffordshire, who marched from pit to pit to spread the strike. After a Chartist petition to parliament was rejected, South East Lancashire became the focus of activity and Chartists had the leading role in opposing wage cuts. The cotton masters in Stalybridge and Ashton-under-Lyne moved to reduce wages by a quarter, and workers held mass meetings which were addressed by Chartists who claimed that 'nothing but the People’s Charter can give us a fair day’s wage for a fair day’s work'.

An organising meeting in Manchester during August of that year was attended by representatives of various trades from towns lying to the north and east of Manchester. Among those in attendance were:

Ashton and Stalybridge workers met on 7 August and gave support for a ‘Grand National Turn-Out’ to begin the next day. Resolutions were passed that expressed support for the Charter. The turn-out began as planned when workers left their factories and moved from workplace to workplace, marching inside and ‘turning out’ other workers to join them. These events became known as the ‘plug plot riots' because as each factory was closed down, the workers would frequently remove the boiler plug from the machinery to prevent it restarting.

The amount of walking involved must have been exhausting but the strikers were determined. Thousands of them marched from Ashton and Stalybridge to Rochdale on 11 August and closed down most of the mills and factories there. A mass meeting was held, passing the resolution that they would not resume work until they had obtained a ‘fair price for a fair day’s labour’. In the afternoon the crowd marched to Heywood and turned out the local mills.

‘This morning a large mass of people proceeded from Bury to Heywood, from Heywood to Leigh, and Leigh to Middleton, turning out the hands at the mills as they proceeded. At each of these districts the crowds were addressed by the ringleaders; at Middleton a female politician addressed the assembled crowd, advising them to pursue the course they had adopted, and to determine not again to resume work until the people's rights, as descriptively embodied in the charter, were acknowledged by the government. The heroine, who was about forty years of age, declared, that sooner than see them act supinely, she would herself lead them on to victory. She said that it was the whigs who had brought them into the present dilemma, and that they only wanted an opportunity to rout them.’ (The Times, 15 August 1842)

The strike was widespread - reaching as far as Cornwall and Scotland - and often violent. Four men were shot at Preston, and at least six people died in a riot at Halifax. Queen Victoria was not amused, and issued a proclamation:


'...great multitudes of lawless and disorderly persons have lately assembled themselves together in a riotous and tumultuous manner, and have, with force and violence, entered into certain mines, mills, manufactories, and have, by threats and intimidation, prevented or good subjects therein employed from following their usual occupations and earning their livelihood.' (London Gazette, Part 3, p.2216)

A £50 reward was offered for bringing offenders to justice. The government cracked down hard and many strike leaders and Chartists were arrested. Although meetings continued in the following weeks, the strike eventually ran out of steam.

The Chartist colonies of the 1840s

The Chartist movement went through a series of ups and downs, but regained strength again in the late 1840s. The Chartists Cooperative Land Society, launched in 1845, had the aim resettling industrial workers from the cities on smallholdings, allowing them to live a better life independent of factory employers. The idea was to sell 100,000 shares to supporters at £2/10s each (paid in regular instalments) and then use that money to buy estates. Lots would be drawn to select which members would receive between two and four acres each.

It seems that no Heywood subscribers were selected for land at these places. This might have been for the best, because most of the workers lacked basic farming skills and life in the colonies was desperately difficult, especially in places were the soil was poor. The scheme eventually collapsed in 1851 after suffering a string of organisational and legal difficulties.

Heady Hill was a noted local centre of Chartist activity. The Radicals had a meeting room at Paved Brow, where they drank beer; read the Northern Star (a Chartist newspaper), and discussed the politics of the day. Local resident John Kay was a noted lecturer on Chartism and other subjects. A number of Heady Hill Radicals went on the famous ‘blanket expedition’ of 1817 to petition the Prince Regent.

A register of thousands of Chartist subscribers is held at the National Archives in Kew. The names of the Heywoodites on that list can be read here.

While it might be claimed that Chartism failed in the short term because the People's Charter was never enacted, it was a powerful expression of the rights of the working class. During the century after the end of the movement, most of the Chartist demands - especially those relating to democratic inclusion and citizenship rights - became laws and rights that modern Britons now take for granted.