The Ashworth Moor Boundary Dispute of 1549 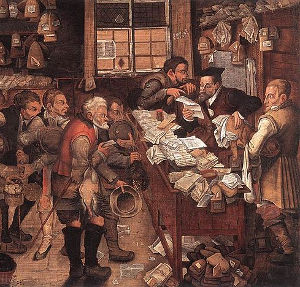 Despite being quite clearly demarcated in the original charter of the 1260s, the boundary lines around Heywood have changed repeatedly over time, with different locales being a part of Heywood, Middleton, Bury or Rochdale at various points in history. Sometimes this change could be incremental, with landowners arguing over rights to small parcels of the rural common land around the area, and some of the boundaries and place names we know today are the result of centuries of very local disputes and negotiation. A legal conflict in the 1540s over whether or not a piece of land in Ashworth lay in the parish of Bury or Middleton was a good example of this process. It shows how, in times gone by, names of specific localities within the landscape were rarely mapped, and were usually passed down through generations by word of mouth and - as we have seen with the name of Heywood itself - subjected to many different spellings.

At the time of this dispute, Heywood was still a small hamlet within the wider township of Heap, which itself was a part of Bury. The disagreement was between Christopher Nuttowe and Arthur Kay of Bury and Robert Holte of Middleton over a ‘waste’ (common land used for grazing) in Ashworth Moor, in the area around what is now Ashworth Reservoir.

The argument centred on the correct naming of a stream that formed part of the border. It had been claimed by the Bury side that a stream called ‘Penkesden Brook’ was part of the western boundary of the Ashworth lands, but Holte and his witnesses argued that Penkesden Brook was the name of what we now know as Cheesden Brook, placing the disputed waste within their land. They claimed that Cheesden Brook rose in the moors to the north but ceased to be called that at the Lumn (Lumn Bridge, at the north end of Ashworth), where it became Penkesden and flowed southeast until it merged with Naden Brook.

Nuttowe and Kay argued that Penkesden was another, smaller brook that flowed into the Cheesden, which was the name of the main waterway that joined with the Naden. This would put the waste inside their lands.

The case was heard before a Duchy Court of Lancaster in 1549. To support their claims, both sides wheeled out the testimony of ‘old timers’ who had lived in the area for decades, and these men gave directly conflicting evidence, probably influenced by who their allegiance (and livelihood) lay with. Some could remember back over 60 years to the reign of Richard III and the aftermath of the Wars of the Roses.

Many old local place-names were used (for hills, streams, woods, bodies of water, etc.), most of which have long since vanished, but the surnames of many of the witnesses are still be familiar to locals today. The spelling used throughout was very inconsistent, with the same names sometimes being spelled in three or four different ways in the records.

The legal proceedings began in July 1549, when Sir William Ratcliff, Sir Thomas Holte, Sir Robert Langley, and Thurstan Tyldesley made their own plan of the ground, and examined some of the witnesses at ‘Agecrose’ (Agecroft) in October 1549. These hearings took place at the homes of the witnesses who could not travel ‘on account of great age and impotence’. The evidence of these men, most of them aged over 70, was valued because of their long memories back to times when documentation was scarce.

Surnames on the Bury side included Wolfynden, Brydge, Smethurst, and Rowesbothom. They all asserted that the land in question was part of Bury and that the stream was called Cheesden. One man said that he had known it by that name ‘continually since King Richard fell’. Richard III had died in 1485, some 64 years before this boundary dispute took place.

They spoke of local places and landmarks named Warmedenhed, Foulbrige, and Cowlomme, Cheseden Linne, Codshawe Bowre (also known as the White Ditch), Horelowe Shawe, Hare Hyll and Cattes Oke (Cat's Oak). These names have long since vanished from the maps, or have gradually changed so much over the centuries that they are now unrecognisable. Some names have survived in altered forms, such as Stanley Syke (now Stand Lees) and Wyndle Hill (Wind Hill, off Ashworth Road).

The general agreement on the Bury side was that the Cheesden met with the waters of Penkesdene ‘fair beneath’ the disputed land, and one man placed it at 'threequarters of a mile'. Most agreed that:


‘the water of Penkesdeyne ‘cometh out of a place in Assheworthe lieng southe from the wast in varyaunce called Warmeden Well, and so goythe a lytle waye Est ward and then turnethe and goythe Southward to a place where a grett oke ayd growe called Cattes Oke, And So descendeth styll Southward betwene the landes of Grystyllhurst on the west Syde and Assheworthe on the northe est Syde, and that the same water of Penkesdeyn metithe with Chesedeyn Broke more than halfe a myle benethe all the wast in varyaunce.’

One witness said that Robert Holte's father had once paid a fine to the deputy steward of Bury for ‘trespassing upon the said waste.’ Another claimed that a tenant of Robert Holte knew the stream running out of Warmeden Well to be ‘Penkesdeyne’, but did not dare to call it that for fear of displeasing his landlord.The next depositions were taken at Ashworth, on the waste in question, in October by Sir Thomas Holt and Sir Robert Langley. This time the witnesses were more supportive of the Middleton side. 70-year-old Edmund Wolffynden, of Cleggiswod*, claimed that he knew well the boundaries,

He said that the water was always called ‘Penkisden’ as far as he could remember, and that it was a special boundary of the west part of the said ground. He placed the Cheesden to the north of the Penkisden, falling into it,


Roger Nuttowe, an old tenant of Richard Assheton of Middleton, said that he had ‘fished in Penkisden water for 60 years and more’. Edmund Holt, aged over 60 years, claimed that he had been born in Bamefurth [Bamford], in the parish of Bury, and lived with his father, who about 50 years earlier had fed his sheep many times to the ‘Standlees parcel’ of the land in dispute, and had paid Oliver Holt for this by mowing and shearing and other work.

James Herdman, aged about 73, said that immediately after Richard III, the tenants of the lordship of Bury heard that the Lord of Derby was approaching with ‘a multitude of Walshemen’, and were afraid that the Welshmen would ‘spoil and rob their goods and chattles’, so they brought their belongings over the water of Penkisden into the disputed land for safekeeping. This is a reference to the aftermath of the Wars of the Roses. Much of the land and offices attached to the warring Duchies of York and Lancaster was in Wales, hence the approaching ‘multitude of Welshmen’.

87-year-old Robert Chadweke, tenant to Robert Holt of Stubley, said that ‘the heirs of Assheworth have had peaceable possession of the said ground for 50 years and more till now of late.’

There are no surviving records of how this dispute was eventually resolved. It is clear that a number of old men had remembered or forgotten what they were required to, making it a difficult case to judge. It is possible that a compromise was reached, and in the 19th century it was noted that, ‘The present boundary between Ashworth and Bury is now for nearly half its length marked by a straight line of stone wall, the remainder by Cheeseden Brook...’

The brook with the disputed name has long since been widely known as Cheesden, while the name ‘Penkesden’ has very notably vanished off the map completely, along with other ancient landmarks and names mentioned during the hearing. The modern locations of the following Ashworth places named during the hearings is uncertain:

The above dispute shows that, in a time when printed mapping was rudimentary, locals had a detailed and ingrained knowledge of very specific placenames, down to small hills, fields and springs. However, that knowledge could be very much disputed depending on the political or economic needs of the people involved.


* Clegg’s Wood is on the south side of Cheesden Brook, near Birtle.

Sylvia’s History Blog said…
Very interesting. If you are researching documents a little more recent, sixteen hundreds, I'm looking for information on a miller named Francis Emerson. The mill was on the Elton-Tottington boarder. I have his will dated 1671 which gives his address as Upper Foulcotes. His son Joseph was an Inn-Keeper at Heathy Hill near what we now know as Summerseat. All these places in the Parish of Bury where they were buried.

Chris Dawson said…
Thanks Sylvia. I don't have access to any documents of that time, certainly nothing like what you seem to have, but I will keep an eye out for those names. The Bury Family History facebook page might be useful for you.
Fri Apr 21, 08:08:00 AM 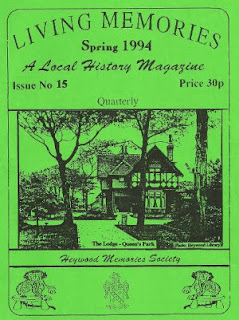 To search for specific keywords or subjects in this page, press 'Ctrl' and 'F' on your keyboard.

The 'places and themes' content of each entry below is divided into the following categories: