171 acres of land in the west of Heywood, mainly home to fields and some farm buildings, had been identified in 1952 as a potential site for what was termed an ‘overspill development’. A request from Manchester Town Hall was made to Heywood councillors to allow them to use the land for construction. A subsequent public inquiry revealed many local objections to the new estate being built, including from the farmers at Darnhill Farm and Darnhill Cottage, who were concerned about losing their livelihoods. Despite this, in 1956 the Ministry of Housing and Local Government approved the compulsory purchase of 176 acres at Darnhill by the MCC.

Construction work on roads and a sewerage system finally began in the late 1950s, but a dispute between Manchester City Council and Lancashire County Council about the cost of sewerage pipes led to delays and the erection of houses did not commence until 1962. The first six houses, near the Heys Lane area, were ready for occupation in March 1962. The first family moved in soon afterwards, but most of the area was still a massive and muddy construction site.

The erection of nine 13-storey blocks of flats, at a cost of £1,641,016, was approved in 1963, with the first structure being completed by the end of that year. These were the first British flats built by the French-developed Sectra system, and were considered to be rather roomy and chic compared to the cramped conditions of Manchester's slums. The splendid British Pathe film below shows work underway on the Darnhill flats in 1963.


A further 357 houses were also completed at Darnhill by the end of 1963, on streets named after Scottish places. About 5,000 people eventually moved there, mostly from Collyhurst and Miles Platting. Other Manchester overspill estates were situated at Gamesley, Hattersley, Haughton Green, Langley, and Whitefield. They were built between 1954 and 1976 and between them contained about 35,000 new council houses and flats.

Other parts of Heywood were also transformed under the Slum Clearance Programme in the late 1950s, after a report showed that 1,266 of the 8,314 permanent properties in the town were unfit for human habitation. In places like Heady Hill, whole streets of dilapidated houses were demolished to make way for new homes. The plan was to build 400 new properties near Bury New Road and Bury Old Road. Angel Meadow became the subject of a Heywood Corporation compulsory purchase order in 1957, and 5½ acres were cleared, affecting 440 residents living in the area. Council flats were later built there. 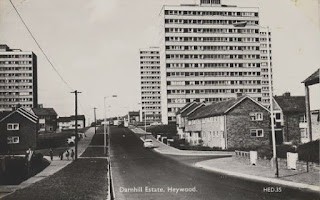 A range of new community facilities were built to support the new housing at Darnhill. These included shops, schools, churches, a library and a community centre. The first school there was Darnhill County Primary (originally called Heap County Primary) which originally had just three pupils. Our Lady & St Paul's Infant and Junior School opened in April 1963, and St Margaret's C.E. Junior School opened in January 1964. Two churches also opened, St Margaret's and Our Lady & St Paul's. A secondary school called Sutherland High opened in 1966. This later became Heywood Community High School and closed in 2010. New pubs such as the Criterion and the Highlander also opened. 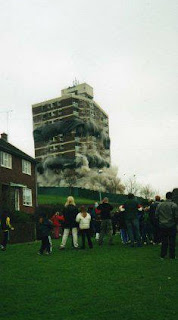 While the estate soon developed a strong sense of community, there were still the kind of problems usually associated with lower socio-economic areas and by the 1990s some of the tower blocks were unoccupied and covered in graffiti. There was also widespread dissatisfaction with how the Manchester City Council ran the estate, and in 1998 over 90% of the local residents voted in favour of transferring the management of Darnhill to the Guinness Trust, an affordable housing provider. This led to some quick changes, most notably with the demolition of the tower blocks.

Less than 40 years earlier, these flats had been considered state-of-the-art buildings and a huge improvement in living space for the families who had moved to them from Manchester slums.

There are now well over 1,400 properties on the estate comprising mostly 2-3 bedroom houses, 1-2 bedroom flats and 1 bedroom bungalows. 1,035 are owned by Guinness Trust, 350 were sold under the ‘Right to Buy’ scheme, and the remainder are new homes built by the Guinness Trust and private developers.


Population booms in Heywood
The construction of the Darnhill estate was the third time that the population of Heywood grew sharply after an influx of 'outsiders'. The first was in the early 19th century, when thousands arrived from depressed country areas to work in the thriving new cotton mills. These people were not always made welcome by the locals, although many modern Heywoodites can probably trace their family history back to these arrivals. During the mid-19th century there was also a significant influx of Irish people escaping the turmoils in their own country. In fact, between 1780 and 1880, the population of Heywood grew from 2,000 people to just over 22,000.

Terry said…
Darn Hill was at the time a Godsend for the working class people of Manchester. My own parents moved from Blackley into a damp prefab in Heywood in the early 1950s, thankfully being rehoused to Hopwood later. My grandma moved from Blackley into a nice warm flat on Darn Hill in the early 60s. Other members of the family moved from appalling slum conditions in Ancoats and Collyhurst to Darn Hill and Langley. At the time they provided a great social need.
Tue Mar 15, 10:21:00 PM

Chris Dawson said…
Yes, I think it is being forgotten just how much parts of urban Britain were falling apart after WW2. Lots of Victorian areas were just crumbling, if they hadn't been bombed. Somewhere on the Facebook page I've linked to galleries of Manchester slums in the 60s, and they were almost Dickensian.
Tue Mar 15, 10:55:00 PM

mcgide said…
This is where I grew up our family lived in argyle st and my nan lived across the road this was about 1968 it was a lovely place to live with a real sense of community and I also went to Our Lady & St Paul's school funny I live just a few miles now from where I grew up
Mon Feb 06, 08:11:00 PM

Chris Dawson said…
Thanks mc, I grew up on the Back o th Moss and it had that sense of community too. Felt like everybody was more or less in the same boat.
Fri Apr 21, 08:02:00 AM

Unknown said…
I grew up on Darnhill, Ballater closed. It was both exciting and sad watching Elgol Court being demolished. Thanks for putting this blog together. Great work.
Sun Dec 10, 05:07:00 PM

Catholic Left-winger said…
When first visited Darnhill in the late 1980's, I was amazed to here my own accent to the north of Heywood, including from grandchildren of those who moved there. A great community.
Fri Jan 26, 10:45:00 AM

Unknown said…
I was born and bread on the hill born in Dunrobin close when home births was normal in those days 1965 moved to a 4 bedroom in Galloway close and I still live on the estate Glencoe close where I've brought my family up as well was a fantastic community in the 70s & 80s even into the 90s brilliant place to bring up a family gone a bit down since then fantastic memories loved it
Sat Jan 27, 01:47:00 PM

Unknown said…
Both sets of my grandparents were relocated to Darnhill from inner city slums. Resulting in my two grandmothers setting my mum and dad up on a blind date while sat in the hair dressers on the shopping precinct. My gran and grandad ended up buying their house on stromness grove, my other grandparents rented their house on Grenock untill being transferred to one of the bungalows. My sister and I lived on Dundee close and Galloway and both attended Darnhill primary.although we all live in sunny Morecambe we still check in on the old place now and again and will always call it home and remember it with a smile
Sat Oct 06, 11:28:00 PM

Unknown said…
Both sets of my grandparents were relocated to Darnhill from inner city slums. Resulting in my two grandmothers setting my mum and dad up on a blind date while sat in the hair dressers on the shopping precinct. My gran and grandad ended up buying their house on stromness grove, my other grandparents rented their house on Grenock untill being transferred to one of the bungalows. My sister and I lived on Dundee close and Galloway and both attended Darnhill primary.although we all live in sunny Morecambe we still check in on the old place now and again and will always call it home and remember it with a smile
Sat Oct 06, 11:29:00 PM

Unknown said…
I grew up on Darnhill when it was brand new, great neighbours, great friends, I would not change a thing,Lovely memories !!!!
Sun Nov 11, 04:29:00 PM

Unknown said…
We moved to Darnhill from Collyhurst in the early 70's. We moved to Atholl Drive and went to Our lady's infant and primary school. Our Gran moved from Blackley to Portree Court in the 80's. We had a great time on the hill, the community spirit was strong and people looked out for each other.
Mon Nov 12, 08:18:00 AM

Unknown said…
I grew up on Dumbarton in the 90s, it was an exciting time with alot of crime and drug dealers but everyone stuck together and if you was from darnhill you would always be looked after, it was sad to see the flats go down though
Fri Nov 16, 07:39:00 AM

Unknown said…
We moved to Darnhill in 1972 from Blackley Village, to Galloway Close. Went to Sutherland High School and then I moved into Elgol Court in 1980, went to do my nurse training at Bury, followed by midwifery in 1985. Loved living on Darnhill there was a real sense of community, happy days in the Criterion! Remember so many fanmilies, the Ellis family,Diane,Karen and Joyce Nelson,the Ormans, Loretta , the list goes on, fab people on a fab estate, such happy times!
Fri Jan 25, 12:10:00 AM