'...The green rush, the green rush, we bear it along,
To the church of our village with triumph and song,
We strew the cold chancel and kneel on it there,
While its fresh odours rise with our voices in prayer.
Hark the peal from the old tower in praise of it rings,
Let us seek the green rush by the green woodland springs.'
('The Rush-Bearing at Ambleside', Letitia Elizabeth Landon, 1839)

'With reference to the customs of our forefathers, they were by no means of an elevatory character, but tended rather to immerse them deeper in the depth of immorality and vice. The most prominent of their customs, and that which they made the most of, was Rushbearing.' (Heywood Advertiser, 24 August 1906)

The above was written about life in 1780s Heywood, but what was this ‘Rushbearing’ that led Heywoodites to immerse themselves in such immorality and vice? It was, in the most basic sense, the annual transportation of new rushes to cover the floors of churches, which shows that the British can turn just about anything into a massive drunken party.

This custom, lately revived in a number of local towns, dates way back to the Middle Ages (5th-15th centuries AD) when most buildings had earthen floors. These got very cold in winter so rushes (actually Acorus calmaus, or Sweet Flag, which is not a rush at all) were scattered around to make the floors more comfortable. These rushes would rot over time and had to be regularly replaced. Churches also needed rushes on the floor, and so locals would gather together and carry bundles of them, tied in ribbons on their shoulders, to those buildings. The rushes would then be spread around the pews to form a thick carpet.

Over time this turned into a widespread festival, and the churches would allocate a specific day in the year for the rushbearing. This was usually around August, when rushes were almost fully grown. After the event, people would retire to an inn to celebrate a job well done. By the 16th century it was customary to ring the church bells and provide wine, ale and cakes for the rushbearers. The festival would attract all manner of ‘unsavoury characters’, such as pedlars and pickpockets, and soon became an excuse for heavy drinking.

The historian Cyrus Redding noted in 1844 that ‘every village or hamlet within six miles of Bury has its Rushbearing’. They certainly happened in Heywood and Ashworth, and Rochdale was a major centre for the festival. The hamlets of Hopwood and Birch often sent rush carts to Middleton. The Heywood event was held annually on the first Saturday in August, and Edwin Waugh wrote about it in 1855:


'In the course of the year, there are two very ancient festivals which are kept up, each with its own quaint peculiarities, by the Heywood people; and commemorated by them with general rejoicing and cessation from labour. One of these is the "Rush-bearing," held in the month of August; an old feast which seems to have died out almost everywhere else in England, except in Lancashire. Here, in Heywood, however, as in many other towns of the county, this ancient ceremony is still observed, with two or three days' holiday, hilarity, and feasting, in the hay season.' (Waugh, Sketches of Lancashire Life)

Life's rich pageant
By the 18th century, the rushes were being packed on decorated carts instead of being carried by hand. These 'rush carts' were the centrepiece of some very grand processions. At the front were the brightly-dressed musicians, belting out tunes such as 'Rule Brittania'. Behind the band was a big silk banner suspended on four poles and carried by four men. Two or three months work usually went into making this banner, which could be up to 5 metres wide and 8 metres long and often decorated with roses and tinsel and painted with a picture of Brittania or some other device.


Following along behind the banner was a man described as, 'the fool or half-wit of the village dressed in the most absurd manner possible, generally a cocked hat, scarlet hunting coat and boots, sword in hand, and mounted on a donkey'. Sometimes the person in this role would dress as a clown, and often in female clothing.

The cart came next. The rushbearing carts in Heywood were made in Hollow Field next to the parish workhouse on the old Bury Road. The rushes on the cart were shaped into an eight-metre-high conical stack by lying them across the cart and then cutting them to the desired form with knives. The person whose job this was called a 'featherer'. The carts were then decorated with garlands, flowers, ribbons, tinsel and silver items such as spoons, tankards, plates, etc. The flowers formed phrases on the side of the stack of rushes, such as 'Fear God', 'Honour the King', or 'Peace and Plenty'. A person would ride on top of the cart during the procession.

The cart was drawn by 30-40 young men, harnessed in pairs and wearing straw hats with ribbons, and white shirts adorned with bright ribbons and handkerchiefs – much like Morris dancers. There were also similarly-dressed men to the sides of the cart, cracking whips in time to the tune of the musicians, and there were also young woman with garlands. In later years horses were used to draw the carts, although the brightly-dressed people still accompanied the cart.


The streets would be lined with crowds of spectators in their brightest clothes, and food stalls and show booths. The procession would stop in front of various inns while the harnessed men performed a kind of morris dance while the 'clown' collected beer money to refresh the performers. Similar scenes occurred outside grand homes, where ladies presented garlands and money. Upon arrival at the church the procession would be welcomed by loud shouts and cheers from large crowds of spectators, and the ringing of church bells and the bells that some of the men wore around their shoulders. When the cart reached the church the flowers and garlands were hung up inside.

In Rochdale there were once up to a dozen carts coming in from surrounding villages, each with its own band, and there was some rivalry to get to the church first as the first arrival received five shillings. This led to some pretty robust confrontations when two different cart processions met up in small streets, sometimes ending in bloody noses.

'Mere rustic Saturnalia'
By the early 19th century Rushbearing had become less common, especially as modern churches had stone or wood floors, and the number of Rochdale carts had dwindled to about three or four by the 1830s. Although it died out in many parts of the country, in the industrial parts of Lancashire it managed to evolve and survive, although it was less religious and more of a drunken holiday. In 1839 the chronicler Edwin Butterworth noted that rushbearing in Heywood was little more than an occasion for "indulging in an extra degree of intemperance, and in practising brutal sports". Writing of Rochdale in 1872, T.T. Wilkinson claimed that "within the last half century the church is frequently the last place thought of in festival, which has degenerated into mere rustic saturnalia".
In 1855 Edwin Waugh noted that the Heywood rushbearing no longer visited a church at all, and shortly after this it was reported in the Heywood Advertiser that:


"We are ready to weep for very shame, to see our fellow men make such spectacles of themselves for the delights to be found in muddy beer - to behold them so lost to manly independence and self respect that for a few dirty coppers they outrage common sense, and make themselves the laughing stock of a noisy rabble... May we be spared to see the custom laid aside, and hereafter referred to as in bear-baiting, sports delighted in by a peasantry whose ignorance has been dissipated, and whose tastes have been elevated by the civilizing influence of an education movement, whose step is firm, rapid, onward."

Rushbearing was stopped in Heywood from 1868 because of this rowdy behaviour, but was revived for special occasions, such as the 1902 coronation of Edward VII.

The custom has now been revived (without so much of the 'immorality and vice') in a number of northwest towns, including Littleborough and Rochdale. The video here shows the arrival of the rush cart in Littleborough this year.


Who knows, maybe one day the annual rushbearing will be held in Heywood again?

Unknown said…
How fantastic it would be to see this custom revived, although where the rushes would be laid I couldn't guess.
Yet another custom sadly gone.
Mon Dec 10, 09:18:00 PM

Chris Dawson said…
It would be great to see something like this take place again. I hear a lot from certain quarters about how proud they are of their 'English heritage' but little in the way of them doing or understanding any of this stuff.
Mon Dec 17, 09:34:00 PM

'Pubs in and around Heywood' Map 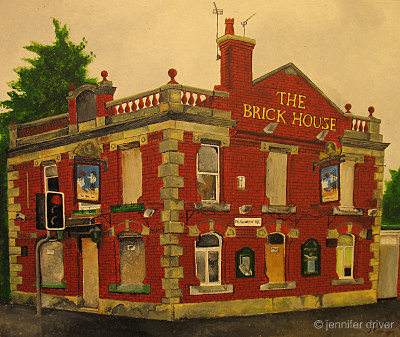 This map displays the locations of dozens of pubs, both closed and still surviving, in and around Heywood, Lancashire. You can zoom in and click on the markers to get historical information about them.