The Meaning of the Name 'Heywood' 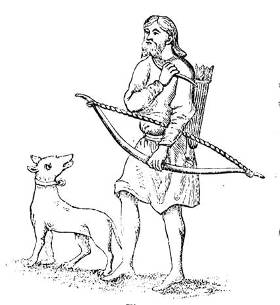 The meaning of many place names around the world can quite easily be traced back to one source or another... but Heywood does not have one of those names. The elements of the word have vague Anglo-Saxon/Old English roots (the language used in Britain circa mid-5th century to mid-12th century) and the meaning has never been definitely confirmed because the origins of the name are lost in the shadows of the Dark Ages.

The Angles and the Saxons arrived in Britain after the Romans left in the 5th century, and the following centuries became known as the 'Dark Ages' because so little of the historical record has survived from that time. There is hardly any physical trace of the human activity that took place in the wider Rochdale area in the 600 years following the Roman exit, making it difficult to decipher the meaning of many local Anglo-Saxon place names with any certainty.

If we assume that the word 'Heywood' refers to geographical features, there are a few possible interpretations and these are mentioned (somewhat clumsily) in the opening lines of the poem ‘Iter Lancastrense’, by Richard James. He had high praise for the quiet rural estate that was 17th-century Heywood.


‘High holtt of woods, or haye enclosed with woods,
Or woddie Isle surrownded with fierce floods,
Thy antique bounds; whence so ere thou have
Thy name, I blesse ye, Heywoods wombe and grave.’

What James was writing about here was a wood on high ground (‘High holtt of woods’); an enclosure surrounded by woods (‘haye enclosed with woods’); and a wood surrounded by water (‘Or woddie Isle surrownded with fierce floods’).

The ‘wood’ part of the name is straightforward enough, coming from the Old English wudu, meaning wood or forest, but as seen in James' poem, it was the 'hey' part of the name that is open to interpretation. Is it referring to height, water, or a hedge-enclosure?

The most common interpretation of the name is that it comes from the Anglo-Saxon haga (hedge), with Heywood meaning ‘the wood surrounded by a hedge’, or, more likely, an enclosure within a wood. In Old English (which was spoken up to about the 12th century) the word hæge meant 'hedge, fence or boundary’. It was hæge that became hay or hey in modern place names. It is also possible that the word comes from the French haie, also meaning hedge. In Middle English (spoken between the 11th and late 15th centuries) hei or hay meant both ‘hedge’ and 'land enclosed by a hedge'. It was a term used loosely in the Middle Ages for any form of enclosure.

Saxons frequently used hedges as a form of fencing, and hays were enclosures used for the capture of game, although they varied in size from simple temporary enclosures to ‘fixed’ hays, sometimes with several in one village. ‘Hay’ was also used later to describe an administrative division of a forest.

It is quite possible that there was an enclosure near the home of the Heywoods. The original description of the land granted to Peter de Hewode had the eastern boundary running along ‘the Hedene’, a stream now known as Millers Brook, on the eastern side of Queen’s Park (also next to the original Heywood Hall). The use of ‘den’ in Lancashire place names is thought to refer to ‘a vale, especially the deep, narrow, and wooded vale of a rivulet’. So would ‘Hedene’ be a ‘vale by the enclosure’?

Another theory is that ‘hey’ actually means ‘high’, as heah was the Anglo-Saxon word for ‘high’ or ‘tall’. Although Heywood Hall was built on a hill, as was common with manor houses, this was by no means an especially elevated part of the local area, and in fact there was higher ground close by in several directions. So James’ ‘highe holtt of woods’ does not make too much sense here.

Sometimes Heywood was spelt as ‘Eywode’, suggesting that it was derived from the Anglo-Saxon ea (water or river), giving us ‘the wood surrounded by the stream’. Joseph Hunter, in his biography of Oliver Heywood, claimed that the earliest standard spelling was Eywood (i.e. Eau-wood), and that ‘Heywood is the wood abounding in streams of water, or bounded by them, as Heywood is on one side by the river Roch’. The 19th-century historian W.A. Abram also supported this theory:


‘The ancient spelling is Eywode, which is understood to describe in Saxon words the wood bounded by the water. The site of the modern town of Heywood, when the name was given was occupied by a large wood which covered the high bank overlooking the river Roch. Heywood Hall occupied the edge of the cliff, and from the garden hedge the descent towards the stream is very abrupt.’

Abram also claimed that James' ‘woodie Isle surrownded with fierce floods’ referred to the River Roch, which had a ‘deep and dashing current at this spot’ after heavy rains. He also wrote a history of Blackburn and had attributed the same water-related meaning to Ewood, a village by the River Darwen, which was also called Eywode and Ewode in older spellings. This might have influenced his thinking, but that spelling was rarely used for the town of Heywood.

So what we know now is that the meaning of the name 'Heywood' has vague Anglo-Saxon origins, the confusion over which has not been helped by a huge variety of spellings over the centuries. The name could refer to hedges, hills, or rivers near a wood, and although it was most likely named after a hedged enclosure, there is no specific landmark that can definitely be identified as the source.