There is no archaeological evidence for human activity in the district around what is now Heywood from the end of Roman rule in the 5th century AD until the Norman Conquest about 600 years later (a time now known as the Dark Ages). Most of what is now Lancashire and Yorkshire was part of Northumbria, an independent cross-Pennine kingdom which had been conquered by the Danes in 866-67 AD. The region under Dane control has become known as the Danelaw. 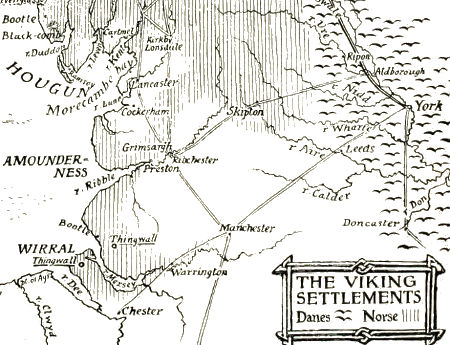 The next record of people we have from this time is in the Domesday Book (AD 1086), which mentions Radcliffe and Rochdale (then called Recedham). At the time of Domesday, Rochdale was a small town, sitting on the main route over the Pennines from Yorkshire towards the Mersey. A second route to the north probably came through Bolton and Bury. The large parish of Rochdale then included Todmorden and Bacup. Rochdale also had a castle, suggesting that it was an important local centre.

The Anglo-Danish nobleman (or 'thegn') who held Rochdale at the time of Domesday was called Gamel (a Scandinavian name). He was based in Elland, in West Yorkshire. A Rochdale-based viking lord would have had political power over the people living in an extended area around it, but there is no evidence to show that the land that now makes up modern Heywood was even populated pre-Domesday.