The Birth of Heywood 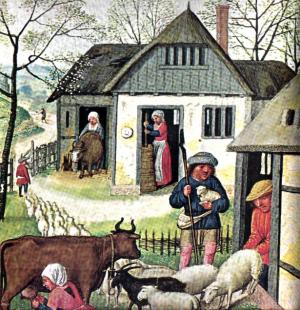 The earliest known record of any place now within Heywood was a charter dated to AD 1210, just over 150 years after the Norman Conquest, and found in the 'Lansdowne Manuscripts' at the British Museum. The original was written in Latin, and roughly translates as:


‘To all the children of Holy Mother Church, be it known and made manifest that I, Adam de Biry, have given, conceded, and by this present charter have confirmed to God and St. Mary Magdalene of Bretton and to the monks serving there - and to the work of her church, one piece of land in Hep which is called Lummehalenges, divided as follows:- That is to say, from the rivulet which falls into Blackwell, through the centre of the moss as far as Meresache - as the land divides itself as far as Guledene, and from Guledene to the water of the Rached, together with all rights pertaining thereto in wood, in plain, in meadows, in pastures, and in waters, and with all common rights of communication, with their livestock with the same ville, wheresoever the livestock of my men communicate with the same ville of Hep. This gift and confirmation I have made to the aforesaid monks, and to whoever they may assign them, for the health of my soul - and that of my wife, and for the souls of my father and mother and of my ancestors and my heirs, in free and perpetual gift, holding of me and my heirs, freely, quietly, and freed from all lay interference, as a free gift. These being witnesses, Roger de Montbegon. William, the Son of Adam. Gilbert de Notton.’

The spelling of the place names mentioned here have changed over time, but most of them have survived. Hep is Heap, Lummehalenges has become Lomax. Guledene is now Gooden (near Hopwood), and the Rached is the River Roch. The location of 'Blackwell' and ‘Meresache’ remains a mystery for now.

The reason for this land grant was that Adam de Bury was a knight who held a lot of land in the local district under Roger de Montbegon, whose maternal grandfather Adam Fitswain had founded the Monk Bretton Priory near Barnsley, Yorkshire, in AD 1150. Roger was naturally a great supporter of the Priory founded and also made extensive grants of land in the Holcombe and Tottington districts to the Priory. Monk Bretton Priory closed in 1538 when Henry VIII appropriated the income and disposed of the assets of Catholic institutions around England.

The Heywood Charter
A more important historical milestone occurred sometime during the 1260s, about 50 years after the Monk Bretton grant, when Adam de Bury granted ‘one parcel of land hereinafter called Hewode’ to Peter de Hewode. The charter was also written in Latin and the beginning translates as:


‘Let it be known now and to all posterity that I, Adam of Bury, have given and conceded and by this my present charter have confirmed unto Peter of Hewode and his heirs, in return for their homage and service, one parcel of land hereinafter called Hewode...’

This land was described as:

The ‘Golden’ or ‘Gooden’ brook, starting near Hopwood, later became the Cartridge (and probably Wrigley) Brook, and the Hedene is now Millers Brook near Queen’s Park. This places Hewode's land lay directly to the eastern boundary of the Monk Bretton land, and would have looked something like the area shaded in green below (all spelling is correct):


As a place, Heywood was actually a local latecomer, and by the time the charter was signed much of the surrounding district had already been settled and named. The larger villages of Bury, Middleton and Rochdale (or Racchedal as it was called then) with their manor houses were a few miles away, but closer to Heywood was the village of Lumhalghs, later known as Lomax. This placename survives in Higher Lomax Lane and Lomax Wood, as well as being a local surname. The eastern border of Lumhalghs was also the western border of the later Heywood land.

Near Lumhalghs were Heap and Bridge Hall, which derived its name from the old area of Bridge, where a William del Bridge was living in 1278. There was also Pilsworth, which around 1260 was given to William de Radcliffe in exchange for a yearly rent of two pairs of white gloves.

To the north was Bamford, which was held during the reign of Henry III (1216-72) by Thomas de Baumford. It had been granted to Thomas by Adam de Bury. Next to that was Ashworth, which was variously spelled as Assewrthe (1236), Hesseworthe (c.1260) and Asschewrth (c.1270) and was part of the lands held under the lord of Middleton. The earliest record of it is in a grant made around 1180–90 by Roger (son of Alexander de Middleton) to Geoffrey (son of Robert the Dean of Whalley) of the whole of Ashworth. One of the witnesses to this grant was Jordan de Ashworth, who was probably the immediate tenant. Another place predating the Heywood charter was Birtle (named as Brithull in 1243, and Birkil in 1246), which was recorded in 1197 and was held by Roger de Birtle in 1246 under the lord of Middleton.

Hopwood, on the southern side of Heywood, was held by the lord of Middleton and was recorded as Hoppewode in 1292. The side closer to Heywood was Gooden (Guldene in the Heywood charter) and later Gulden or Golden. The de Gulden family was mentioned in records from 1282. This old name is used for Gooden Street now, but was once more widespread. The area round the junction at St John’s Church was known as Gooden Gate in the 1850s. Both Gooden and Birch were once hamlets within the township of Hopwood.

All this took place around two centuries after the Norman Invasion, when England was organised under a feudal system with the king and nobility at the top of the social scale. Senior abbots and bishops also had noble status, and between them the Crown, nobility and church (totalling about 200 men) owned about 75% of English land. Immediately below them were men who had been made knights in return for outstanding service or because they had become wealthy in their own right.

Adam de Bury was one of those knights, and the people who lived on his land were either villani or freemen. Villani (serfs) made up the largest class of the population (about 40%) and did not own land but instead farmed their own holdings, which they were allowed to occupy in exchange for labour services for the landowner. A common arrangement was to work for three days each week, with more at harvest time.

Free men (also known as ‘sokemen') made up about one in six of the national population and owned about 20% of the land. These men and their descendants had free land tenure in return for carrying out defined services such as light labor and paying a fixed rent. Peter de Hewode was a freeman under Adam de Bury, to whom he paid two shillings every year ‘on the feast of St. Oswald the King* in lieu of all services and demands’. One of the few conditions was that if de Bury’s pigs entered into ‘the wood of Heywode’, Peter was required to remove them without impounding them.


England at that time was divided into administrative areas called ‘Hundreds’ and de Bury’s land was a part of the Salford Hundred (also known as Salfordshire, and shown in the map below [yellow border] as it looked circa 1610).


It is not known how long the Hewode family had been living in the area, but some sources - which? - have a Peter de Hewode in the locale as far back as AD 1164. He had a son called Robert, and his grandson Peter de Hewode turns up in the records which? in 1234. It is possible that the family owned land to some extent before the 1260s charter, because in 1246 the young Peter de Hewode had ‘recovered 2 acres of land in Heywood against Gervase de Halliwell’, who owned land around Bury.

A number of other men were granted land at the same time as Peter de Hewode. They, in return, had to ‘do homage’ by swearing an oath of loyalty to the giver of the land. The signing would have taken place at the manor house of the de Bury family, in front of a group of notable locals with now-familiar surnames, including Chetham, Pilkington, Prestwich, Middleton, Walmsley, Radcliffe, and Brandlesome.

Several centuries were to pass before Heywood grew in stature and absorbed many of the surrounding folds and hamlets into its municipal borders, but at its inception it was just another small piece in a mosaic of landholdings owned by freemen serving the surrounding lords and knights.

* The feast of St Oswald was held annually on 5 August.

Lapinbizarre said…
As always, v interesting. Many thanks. Off topic, did you know (I did not until today) that the now demolished Unitarian church, off Hind Hill Street, contained an East window designed by Burne-Jones & executed by Morris & Co? Paid for by the Healeys. Wonder if it survived the destruction of the building.
Tue Feb 19, 03:25:00 AM

Lapinbizarre said…
It was saved and is now at the Huntington Library, San Marino, California.
Tue Feb 19, 03:32:00 AM

Chris Dawson said…
No, I did not know that. Weird where things end up eh?

Chris Dawson said…
Thanks for the link there, that's a really good article with some great pictures in it. Love that window.
Tue Feb 19, 04:13:00 AM