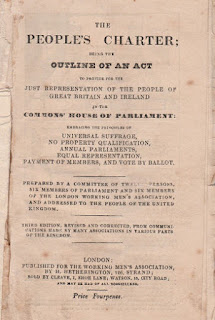 William Bell was born at Wisby Hill, Ecclefechan, Dumfriesshire, in 1816. His parents moved to Heywood when William was three years old. The Scottish philosopher and historian Thomas Carlyle was his godfather, and once visited Heywood to see his godson, who was then seven years old.

Bell received a basic education at the Hatter's School, in Hopwood, and was sent out to work after his father died in 1826. He settled in Salford, where he worked as a fustian cutter, and joined the Chartist political movement in about 1838, in which he was regarded as a 'young man of great talent and a very promising speaker'. In January 1842 he moved to Gooden Lane, Heywood, with his wife and three children, and became a full-time lecturer a few months later, travelling throughout Lancashire and Yorkshire as an advocate of the 'six points of the people's charter', which were designed to alleviate the suffering of the working class.

One speech that he delivered during the 'Plug Plot' riots of 1842 (see 'The People's Charter and Heywood' for more on this) saw him charged with sedition and sentenced to six months in Liverpool's Kirkdale Gaol. During his imprisonment he wrote letters to friends and also sent one a poem at New Year.

After his release he resumed lecturing but financial difficulties led to him taking a job at Heywood Ironworks. He was still active in Chartist politics and represented Heywood at the National Convention in 1845, although he also became more interested in the Co-operative movement that was centred in Rochdale. When the Heywood Industrial Co-operative Society (founded in 1850) opened its first shop on Longford Street, Bell was the first manager. He was described in an 1851 edition of the Christian Socialist journal as a 'quiet, cautious, resolute man' who would probably prove to be 'one of the staunchest and most efficient leaders of the co-operative movement'. He was also described there as an 'old Chartist' who now saw 'his way to the Charter far more clearly through co-operation than he used to do formerly'.

Bell was active in the public affairs of Heywood for over 40 years. In 1846 he was a witness before a House of Commons committee on a proposed Bill that would have allowed the purchase of recently-established gasworks and waterworks in the town.

In 1858 he was elected to the office of assistant-overseer, and also appointed as the collector of poor rates. In 1866, along with others, he conducted a campaign for the amalgamation of Heywood and Hopwood, and contributed leaders on the subject to the columns of the Heywood Public Press. a local newspaper published during 1866-67.

He was chairman of the Heywood Local Board when Queen's Park was presented to the town by Queen Victoria in 1879. He served on the Local Board for over ten years, and was also a member of the Town Council for three years after 1888. He died in Heywood on 8 December 1892 and was interred at Birch.