- February 08, 2017
The English Civil War (also known as the English Revolution) was actually a series of three armed conflicts that took place during 1642-51. Famous - among other things - for resulting in the beheading of Charles I, it also brought about a decline of fortune for the Heywood family that would eventually see them leave Heywood Hall for good.

The owner of the Heywood Hall estate during the war was Peter Heywood, son of Robert (the Poet) and nephew of Peter (Powderplot). True to the family tendency to produce a lot of daughters before a male heir was born, he was the first-born son but had six older sisters.

The Heywood family were Royalists, but as the map below shows, Heywood was deep in Parliamentary territory at the start of the Civil War, while Royalists held western Lancashire (shaded).


In these circumstances, Peter Heywood made a pragmatic decision to side with Cromwell over Charles I.

When the conflict reached Lancashire, the Royalists were on the ascendancy and local supporters flocked to the army of Prince Rupert in large numbers. Peter Heywood was still a captain for the Parliament and often attended strategic discussions in that role, but he was secretly passing intelligence on to the Royalists and causing ‘much mischief’. Parliamentarian Colonel John Rosworm claimed that as Prince Rupert led a Royalist army on Manchester in 1644, Heywood was secretly employed by the Prince to win Rosworm the over to the Royal cause by bribing him with ‘a very great sum of money’ to betray the town. Rosworm was not induced and instead revealed the plot.
Heywood fled but was recaptured, only to be released thanks to the intervention of influential friends. 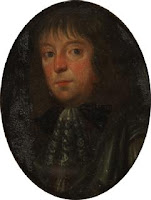 Rosworm (right), whose fortunes declined after the conflict and was resentful towards the people of Manchester, recalled the incident with some bitterness:


‘This Mr. Peter Heywood... was a Captaine in Lancashire for the Parliament, was often in our private consultations; and by holding intelligence with the Enemy, did us much mischief. He went oft to Chester, Oxford, and other Garrisons of the Enemy, discovering our secret results. This being at length found out, and proved against him, he was secured by the Committee, and yet without the consent of the rest of the Committee, contrary to an ordinance touching such cases, released by Col. Holland; two of his friends also being bound for his appearance, which never was questioned; though he presently upon his enlargement went to the Enemy, and was afterwards thought the onely fit instrument to work me to this treacherie. His method was, first to take advantage of the injurious and most unthankfull unworthinesse, which the Town had used towards me, stirring those passions in me which he knew were deeply provoked. This done, he offered in behalf of Prince Rupert, that I should have great preferments under Prince Rupert; besides the perpetuall obligations of affection and honour from many most noble friends, which I should look upon as purchased by the desert of such seasonable and usefull service.

‘I was not so little a fool, though I never meant to be a knave, but I gave the propounder audience, to give some encouragement to the businesse, so much as to fish out which way the Enemy would lay the stratagem, and, to secure myself from suspicion on their part, appointed them a time of receiving their hopes. And I must needs say, I could with more ease have sold them, man, woman, and child, with all they had into their Enemies' hands than at any time I could have preserved them; but, alas, I should then have been a Manchester man, for never let an unthankful man, and a promise breaker, have another name.'

Changing sides in the Civil War was a relatively common practice, and landowners like Heywood often feared for the future of their estates in enemy territory, so the changing fortunes of the war saw many people move from one side to other, and sometimes back again.

Heywood then sought refuge in the Isle of Man, only leaving it to take part in the battle of Worcester with a Manx Royalist contingent in 1651. In consequence of this, all his estates were sequestered (seized by the State) and he was charged with 'Deliquency, deserting his habitation, going into the garrisons held against the Parliament, and adhering to those forces'. He paid two fees of £60 and £341 by 1652 to recover his estate, but asked for leave to sell land to help pay other fees, which suggests that the family finances were at a low ebb. These were hard times for him, but in later centuries soldiers would have faced a firing squad for actions such as his.


Peter was the first Heywood to be connected with the Isle of Man, and he married Alice, the daughter of the Governor there. He died in 1657. He and Alice had nine children. Continuing the family tradition, the first seven were girls, then came two boys who were, also in the family tradition, named Peter and Robert. Young Robert went on to become the governor of the Isle of Man.

The last Heywood of Heywood Hall was (another) Robert, a clergyman who sold 115 acres of land in Heywood and several farms in Heap, Bury, and Middleton, to John Starkey of Rochdale for the sum of £1841 8s. 6d. That all took place in in 1717. It is thought that the sale was prompted by a decline in family fortunes as a result of the Civil Wars. Robert afterwards retired to the Isle of Man, where he died in 1742.

The Heywoods were not the only local Royalist-supporting landowners to suffer as a result of the Civil War. The Holt family of Ashworth had their estate sequestered in 1643 but were able to recover it three years later, but then had to mortgage it to Sir Ralph Assheton of Middleton shortly afterwards.