Jemmy Whitehat: A 'Witch-Doctor' in Heywood? 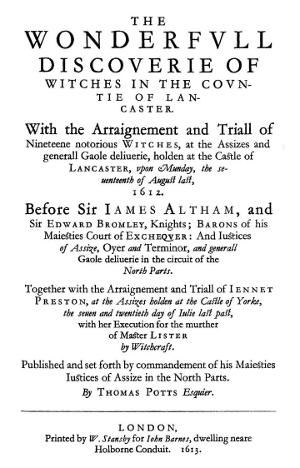 When it comes to the subject of witchcraft, Lancashire has a very notable history. Until recent centuries, rural parts of the county were perceived by outsiders as something of a backwater, full of deeply-held folk superstitions and religious zealotry. There is evidence that people in parts of 19th-century Heywood still believed that ill-fortune had supernatural causes and could be warded off with charms and rituals. In this cultural environment, it is no wonder that belief in witches and witchcraft was so strong.

The Witch Trials of August 1612 provided the most dramatic story of Lancastrian witchcraft. In that legendary case, ten women and two men from Pendle Hill were charged with using witchcraft to murder ten people. Most of them were tried at Lancaster Castle, and at the same sessions another three women from the village of Samlesbury were accused of using witchcraft, child murder and cannibalism. Alongside them were Isobel Robey of Windle, accused of causing sickness by use of witchcraft to cause sickness, and Margaret Pearson (the ‘Padiham witch’), facing her third trial for witchcraft, this time for killing a horse.[i] One of the accused died in prison, while ten were found guilty and hanged outside the castle, with another hanged in Yorkshire.

There were cases closer to Heywood around that time. In March 1631, the death of the infant Richard Assheton, the eldest son of Ralph Assheton (Lord of Middleton), was attributed to the work of a local man named Utley, who was 'reputed to be a wizard'. The unfortunate Utley was subsequently tried, found guilty, and hanged at Lancaster Castle for this supposed crime.[ii] Witchcraft at this time was widely feared, and even the reigning James I of England had published a manuscript titled Daemonologie in 1597, inspired by his strong interest in 'witch hunting'. He had even personally supervised the torture of women accused of witchcraft.

This ancient dread of witches lingered for a long time in Britain. For example, during the late 19th century there was old woman living near Burnley who was much feared by her neighbours, as it was believed that if they offended her in any small way, she would use her powers of witchcraft to malevolently injure their cattle. For this reason, it was said that ‘many a lucky-stone, many a stout horse-shoe and rusty sickle may now be found behind the doors or hung from the beams in the cow-houses and stables belonging to the farmers in that locality’.[iii] This use of charms to ward off the supernatural was observed in the countryside around Heywood by Edwin Waugh during the 1850s. Some farmers there still felt that any misfortune - spoiled milk, bad eggs, sickness in the livestock - was caused by mischievous beings known as ‘boggarts’, and so things like horse shoes were hung over doors to keep the boggarts away. One old man that Waugh spoke to near Birtle claimed to have caught a boggart, then killed it and buried it in a special ritual under an ash tree, probably with a dead bird for added magical protection.

William Robertson's book Old and New Rochdale, published in 1881, contains a story about an old woman called Janet Lord who lived in a cottage at Packer Meadow (now the Packer and King Street area near the town hall) around the year 1790. Local residents regarded her as a witch, a belief not dispelled by her description as ‘a peculiar looking woman, of a sullen disposition, and had formed the habit of continually muttering to herself’. Some of her neighbours blamed any misfortunes that befell them on her witchcraft, and one of them, believing that he had ‘been witched’ after suffering losses, approached ‘Jemmy Whitehat’ who lived in Heywood. Whitehat reportedly gave him a special charm, stating that ‘the individual who had bewitched him would be frizzled alive’.

A few mornings later (so the story goes), Janet Lord was found burned to death in bed, although the bedclothes were not even singed. Some people believed that it was Whitehat's charm that had caused her death, although some others thought she had been murdered. There was also the possibility of a simple accident, in which her clothes had caught fire while she was near the fire grate, and she then managed to crawl into bed, severely wounded, and died there. After this event, her cottage was considered to be haunted, and neighbours ‘passed it with dread, and it was said that Janet had been often seen, after her mysterious death, wandering about the old building as if in search of treasure’. It remained unoccupied for years afterwards, until it was eventually turned into a small hat factory.[iv]

Edwin Waugh wrote about beliefs about witches in Heywood during the 1850s, and the powers of people such as Jemmy Whitehat:


"There still lingers the belief in witchcraft, and in the power of certain persons to do ill, through peculiar connection with the evil one; and the belief, also, that others, - known as ‘witch-doctors,’ - are able to ‘rule the spells,’ or counteract the malign intents of necromancy, and possess secret charms which afford protection against the foul fiend and all his brood of infernal agencies.” (Waugh, Lancashire Sketches)

While there might be a germ of truth in this story, it is likely that much of it is urban myth. Initial research has yet to locate a Janet Lord in that area at that time, as well as a James Whitehead/Jemmy Whitehat in Heywood, although they might well have been real people. Records show that a Ladock and Mary Whitehead were living near Wrigley Brook in 1804, and several other Whiteheads are recorded around town during the 1820s, but so far there is little sign of the mysterious ‘witch-doctor’ Jemmy. 'Whitehat' might have just been a nickname. If he was reputed to have charms strong enough to cause the magical death of another person, then he might well have been seen as something of a witch/wizard himself. The only information we have about him so far is that brief mention recorded by Robertson in 1881.

While the basic historical accuracy of much of this story needs to be verified, it is clear that many early Heywoodites - ignorant of scientific and medical causes for such ‘misfortunes’ as sick sheep - held a very real belief in the power of superstition, the supernatural, and magic. As seen above, there is a historical account of at least one witch or wizard, or maybe a 'witch-doctor', living in the town. As with many other small Lancashire towns of the time, this would have been something to be expected.

Any further information on witchcraft and Heywood from any readers here would be welcome.