The Old Mills of Heywood: C-E 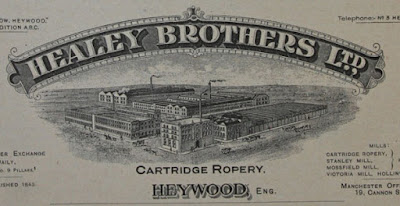 1874: Became Healey Bros. when his sons William, Robert and Jehu took over the business. They manufactured many types of rope including mill drive ropes, and a rope walk stretched from Cartridge Ropery through the grounds of Brooklands, owned by the Healeys, until 1940.
1888 directory: Healey Brothers (manufacturers of all kinds of rope, twine, cotton & tubular banding; also main driving ropes for mills), Cartridge Steam Ropery & Broadfield Mill. 1960: Healy Bros. taken over by British Ropes.
1971: Became British Twine and Rope.
2018: Building still present and in use.

Cheesden Lumb Higher
Cotton
Cheesden Brook, Cheesden Lumb
1845: Built as a cotton mill.
1898: Closed after the water rights were sold for the construction of the nearby Ashworth Reservoir.
1982: Archaeology - embanked pond above foundations.


Cheesden Lumb Mill
Woollen
Cheesden Brook, Cheesden Lumb
1786: Built as a woollen mill.
1789: Advertised for sale in the 'Manchester Mercury'.
1809: An advert listed it as as having a perching mill, blueing house, teaster and belonging tenters, and a stove house where sulphur dioxide fumes bleached woollen cloth for blankets. A carding engine was also introduced in this period.
1848: Marked on OS map as Cheesden Lumb Mill (woollen). It was later used as a cotton waste mill, and then the manufacture of lamp wicks.
1898: Closed after the water rights were sold for the construction of the nearby Ashworth Reservoir.
1982: Archaeology - Ruins of three-storey mill with extension across the stream; stone-sided wheel pit.


Cocker's Mill
The exact location of this early mill is uncertain, but it was on Bamford Road and might have predated the Moss Mill there. Maps show no other buildings on the road that look like possible sites. The 'Heywood Town Guide' (circa 1950s) records these details:


"This particular undertaking was formerly occupied by one John Turner who kept a grocers shop in Wilton Street about 1842 to 1850. It is curious to remember that a gin-wheel, turned by horses, worked the machinery in this mill."


Croston Close Lower (aka Lower Bottoms)
Woollen
Cheesden Brook, Croston
1830s: Open by this time, a woollen mill was owned by George Howarth (brother of John).
1834: It was reported that a 'new mill' here was washed away by flood waters.
1898: Closed after the water rights were sold for the construction of the nearby Ashworth Reservoir.
1982: Archaeology - Remains of the pond but little of the mill itself.


Croston Close Upper (aka Middle Bottoms)
Cotton weaving, probably opened as woollen mill
Cheesden Brook, Croston
1810: Open by this time (cotton) was another mill owned by Croston Close farmer John Howarth, and one that was probably established as a woollen mill, spinning and carding wool for the nearby cottage weavers. Most of the workers at these smaller mills in the valley were - like the owners - from the local farms.
1898: Closed after the water rights were sold for the construction of the nearby Ashworth Reservoir.
1982: Archaeology - Stone-built weir, mill pond with overflow, foundations of mill below pond with wheel pit.

Unknown said…
I am descended from the Ramsbottom family that built some of the mills. I would love to know more. Can anyone point me in the right direction?
Mon Jun 21, 11:04:00 PM